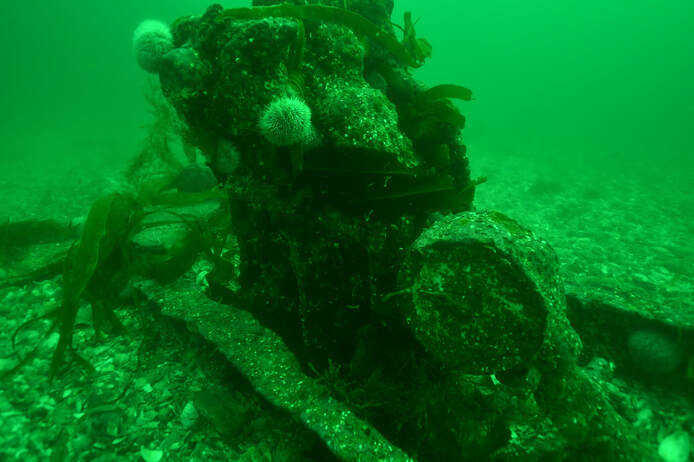 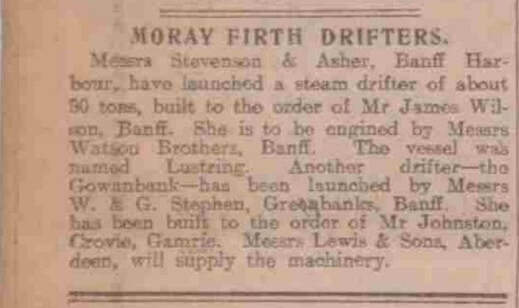 HMD Lustring was employed as a boom net barrier tender for the Kirkwall boom.  ​
THE LOSS
On the 3rd October 1918 at 7.30 pm the Boom Net Tender HM Drifter 'Lustring', while working at the Kirkwall boom net, collided with HM trawler 'Elvina' No 701 (GY.238) and then foundered in 14 fathoms, close to the shore off Hellier Holm, Shapinsay.

​All crew were saved.

​An enquiry held in the Kirkwall Hotel on 10th October 1918 ​found:

''We find the chief skipper of ''Elvina'' did not exhibit due care on approaching the ''Lustring'' , and his lack of caution in closing a vessel which appeared to him to be maneuvering was solely the cause of the collision and his final order prior to the collision to be unjustifiable in as much as he put the helm hard a' port  knowing ''Lustring was crossing port to starboard''. 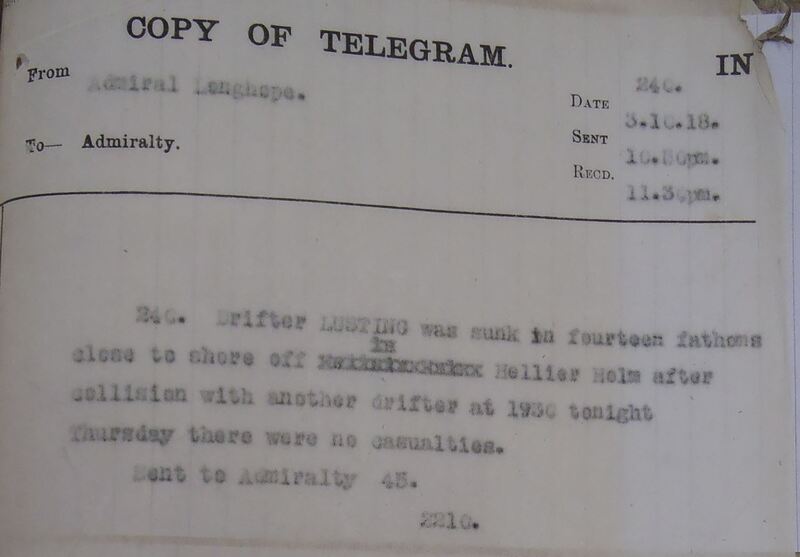 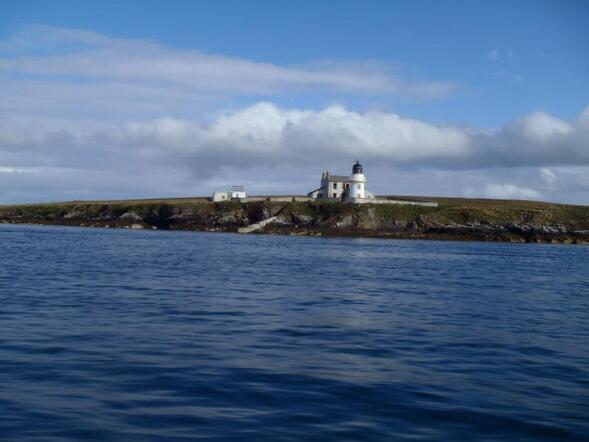 Helliar Holm Lighthouse
The wreck of HMD Lustring was located using magnetometer and side scan sonar by SULA Diving on 25th May 2021.  ​ 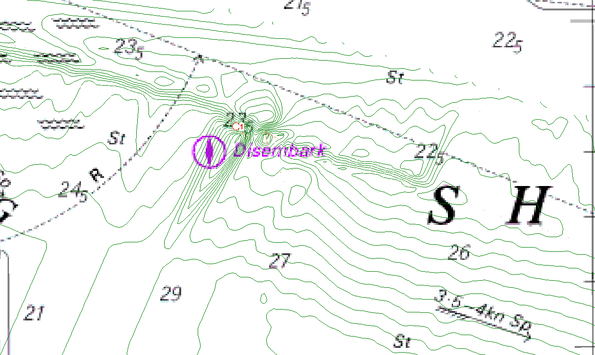 Magnetometer contour chart
The Survey
A magnetometer survey was conducted around Helliar Holm checking all the 14 fathom sounding on the 1917 Admiralty chart. A good magnetic response was recorded south east of Helliar Holm. The magnetometer data was post processed using SonarWiz 7 software. The area was then surveyed with a C-Max CM2 side scan sonar and a number of contacts were located.

MaxView basemap with side scan coverage. 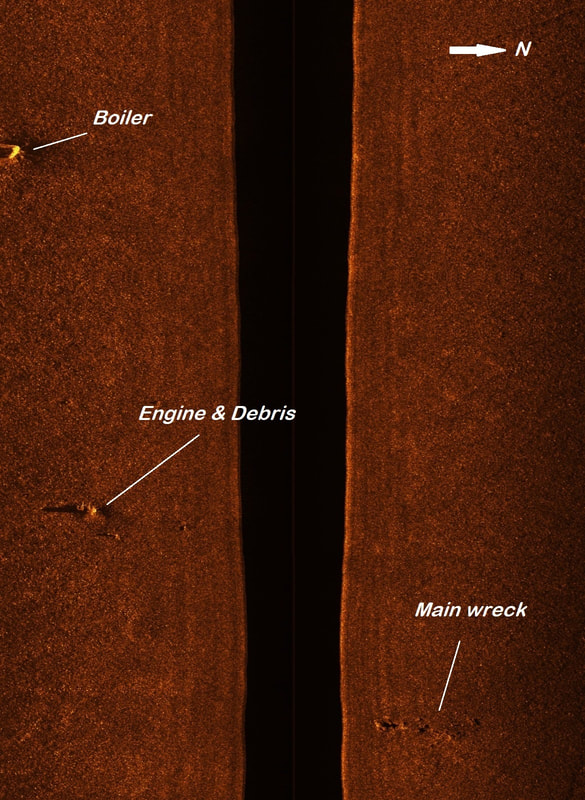 Side Scan image of the wreckage area.      Image: SULA Diving 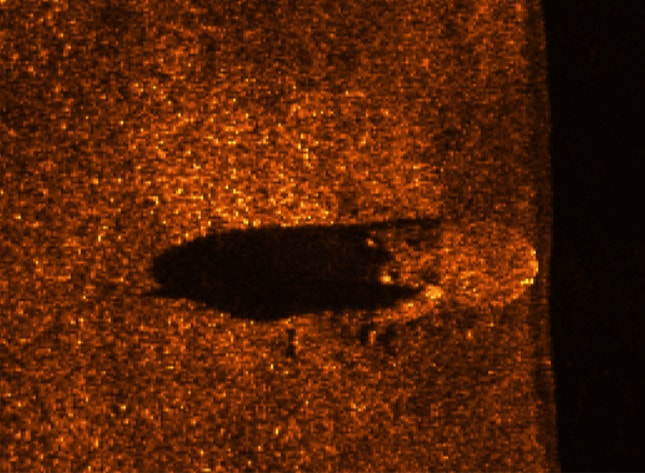 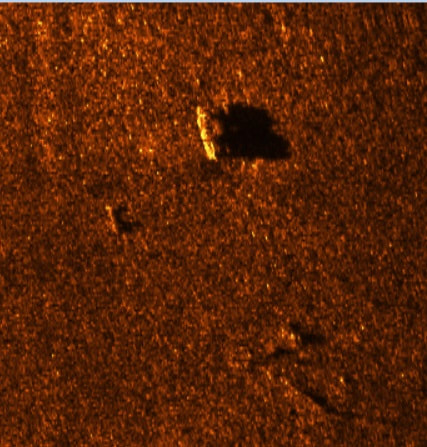 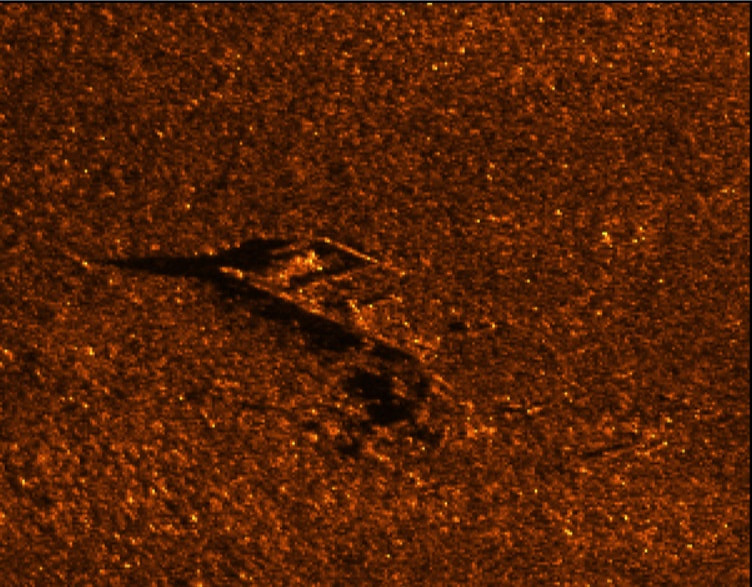 From the side scan data the wreck could be seen to have spread over a wide area, with three main contacts, in a straight line corresponding with the tidal flow.

The boiler could be easily identified from the side scan data with a fairly large contact (engine) midway, with some scattered debris, to a framework thought to be the main wreck site.

The distance between the boiler and main site is 157m. As the tide was 4 hours into the flood when the accident happened it could be considered the vessel may have capsized with the boiler falling out, followed by the engine before the drifter finally sank.

The wreck was dived on 04/06/2021 and the three main contacts located. The boiler has parts of the funnel underneath which supports the theory of a capsize happening prior to the vessel foundering.

The large two cylinder engine was then dived, cylinder heads were measured.

The framework was found to be the base of the wheelhouse with the large helm and ships telegraph still in-situ. The deck and wooden hull has all gone. 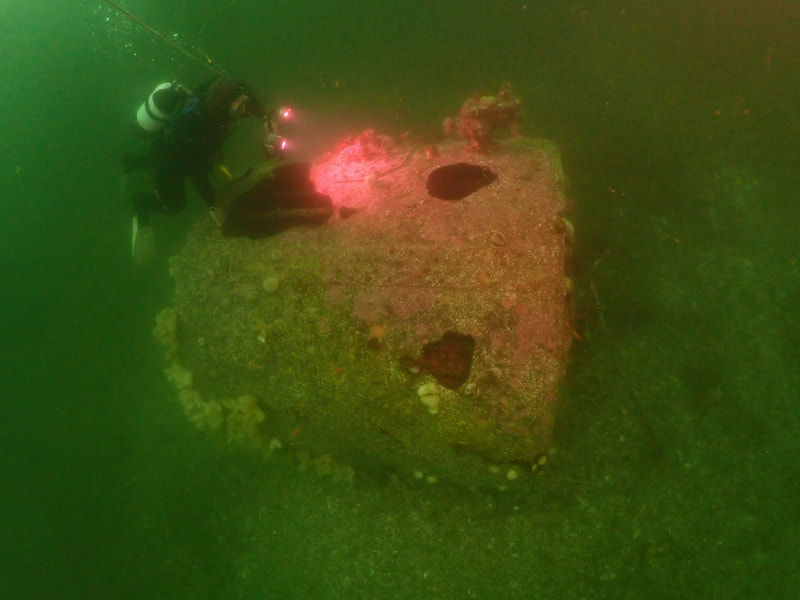 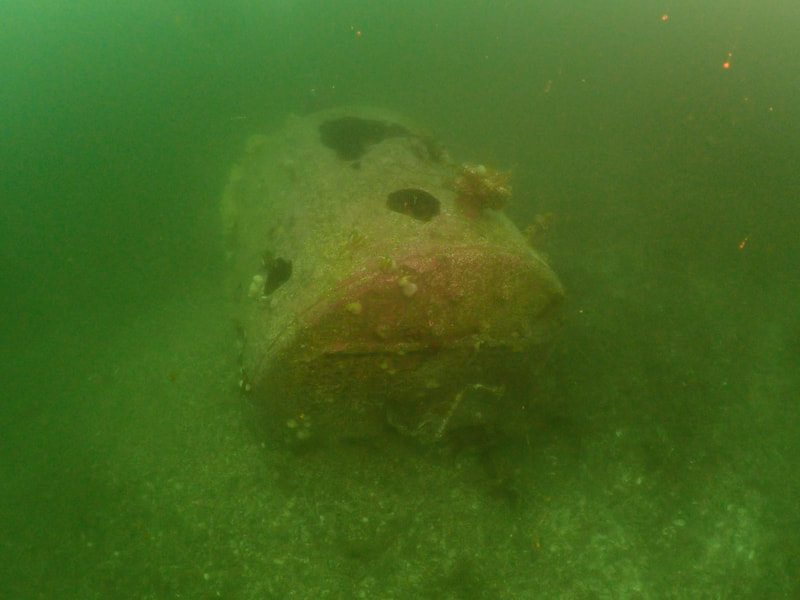 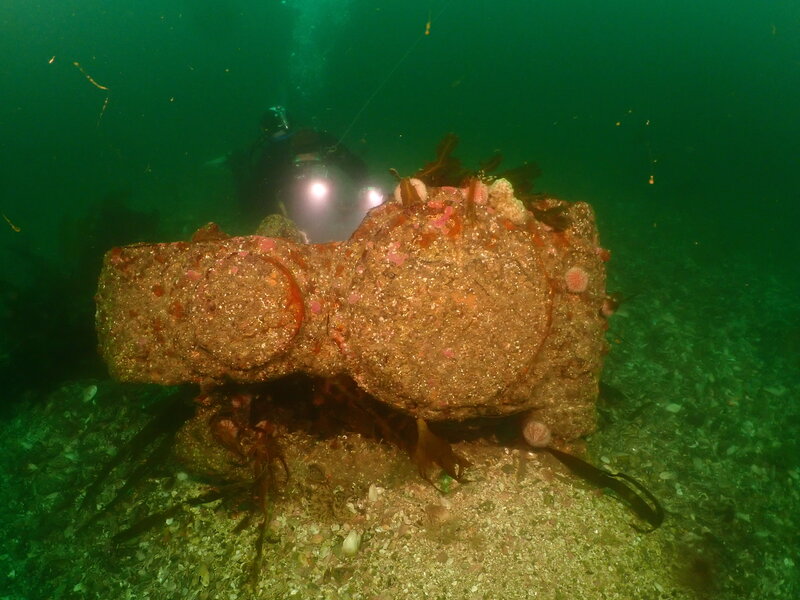 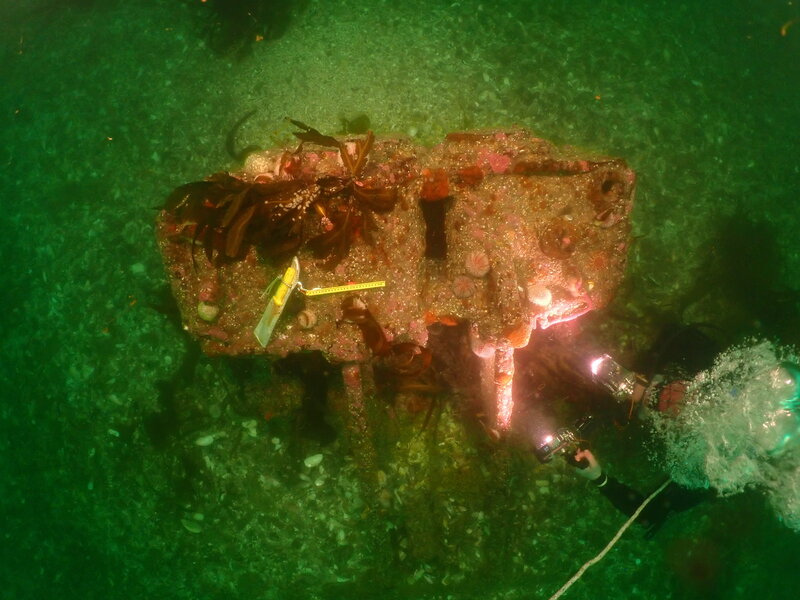 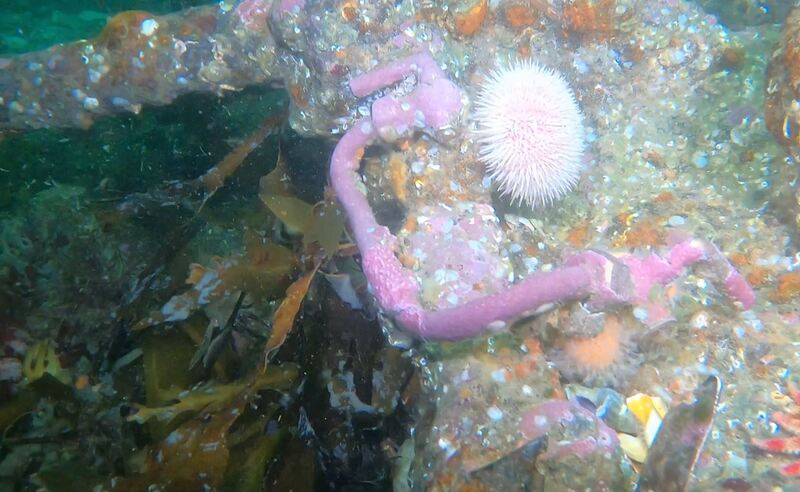 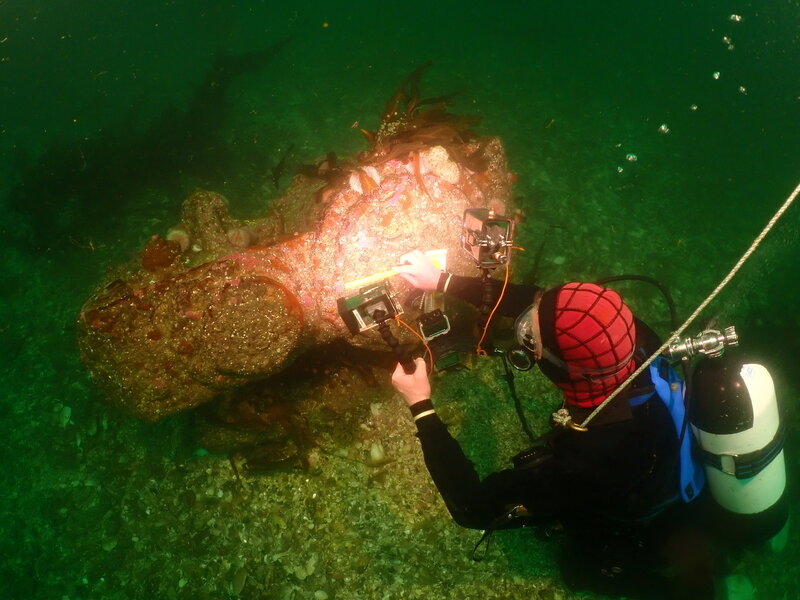 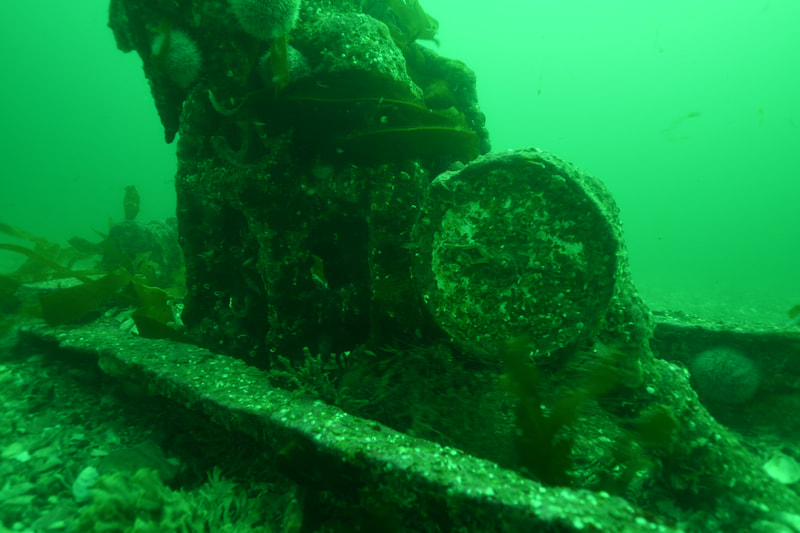 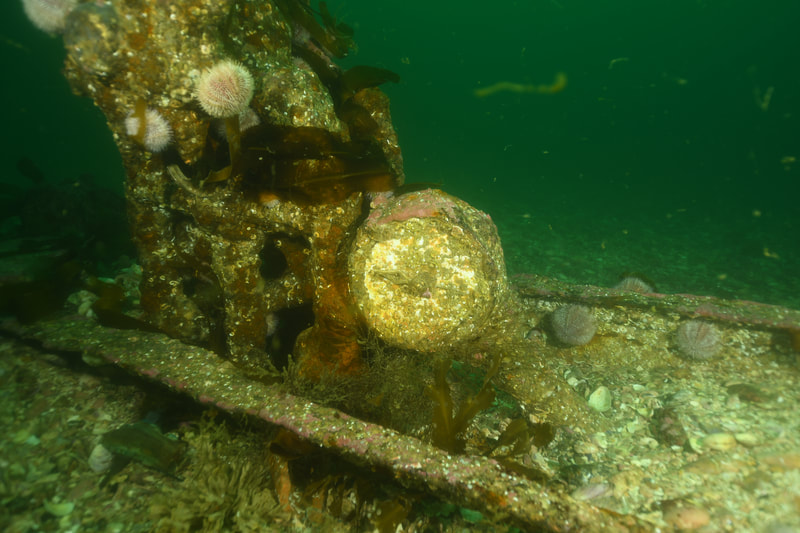 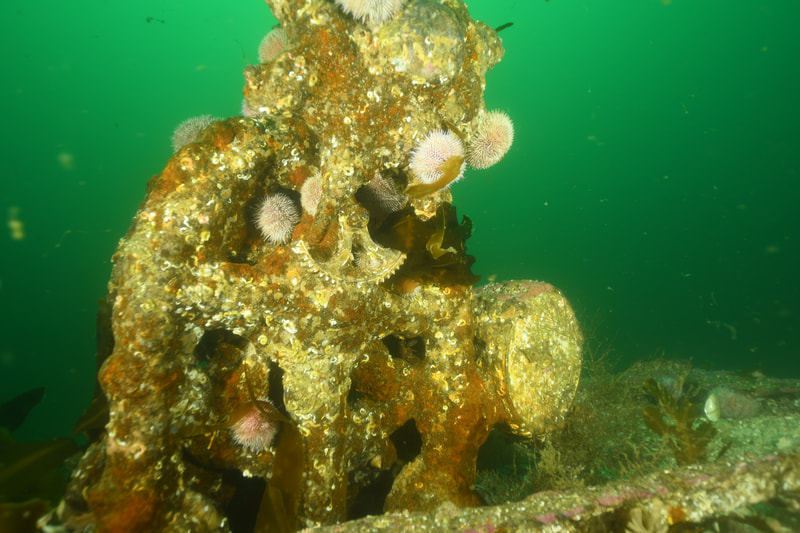 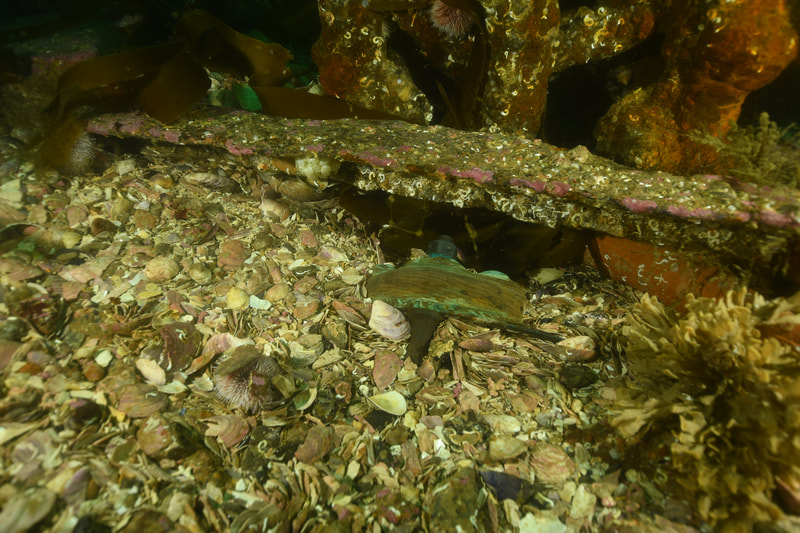 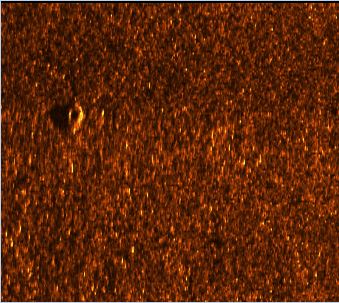 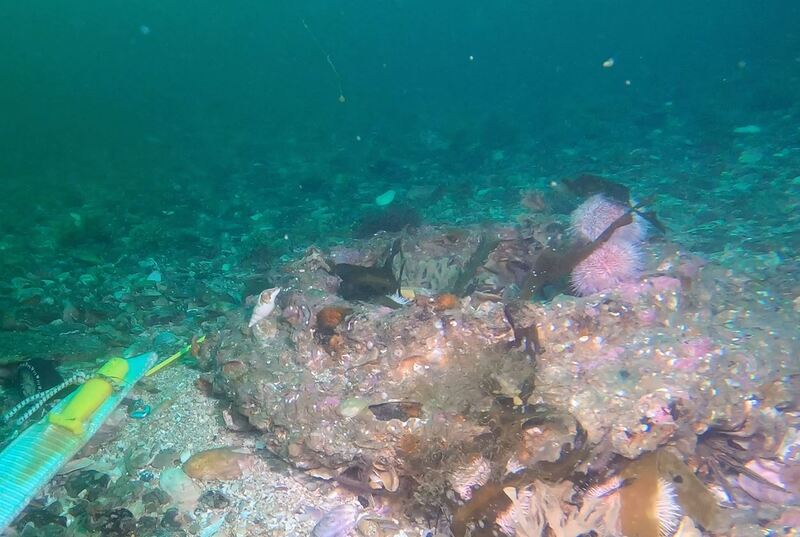 Photos showing the boiler, two cylinder engine with brass tap , the helm and telegraph from HMD Lustring, a steel ring seen on side scan between the engine and boiler. .Photos: SULA Diving & Keith Rendall.