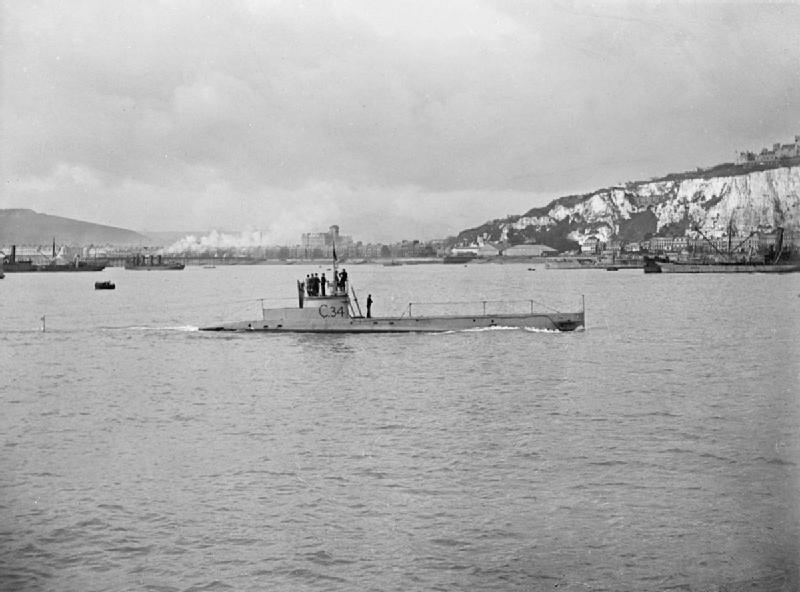 On the 22nd July 1917 C 34 was listed as 15 hours overdue. Fair Isle and Sumburgh were asked to keep a lookout. A submarine was sighted but turned out to be C 22.

On the 23rd July 1917 there was a report in the Dutch press that C.34 had been sunk and one survivor, a stoker was taken prisoner.


It had been widely documented, in some books and on crew memorials, that the date of loss was 21st July 1917. This was the date the submarine was listed as overdue. It is known that C34 was sunk by U 52 (Kptlt. Franz Krapohl).  A review of U 52's KTB (logbook) shows the date of sinking to be 17th July 1917.

On being recovered from the water Frank Scoble said to U 52's commander Kptlt. Franz Krapohl ''You won the game''. 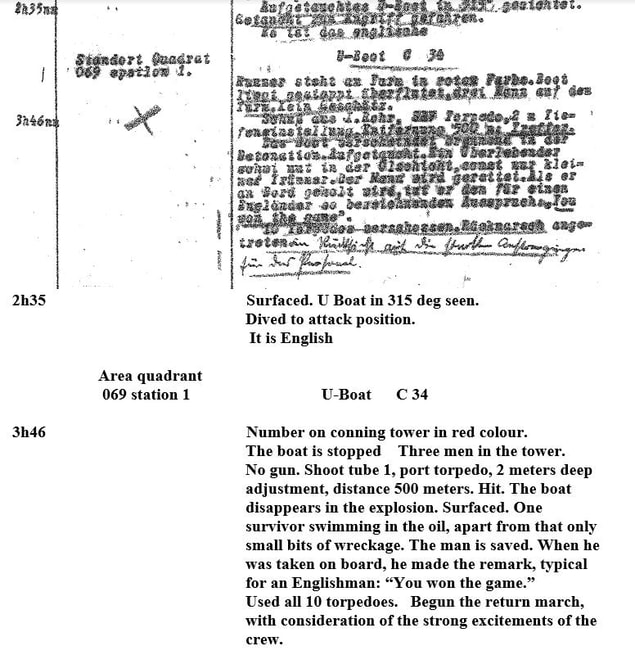 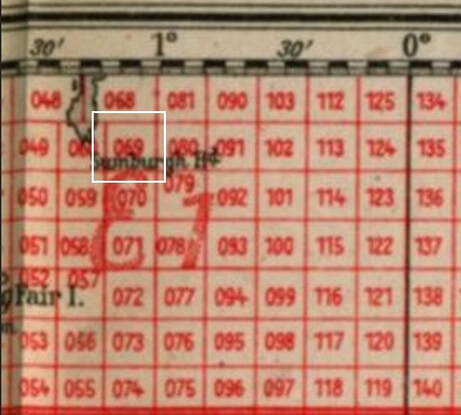 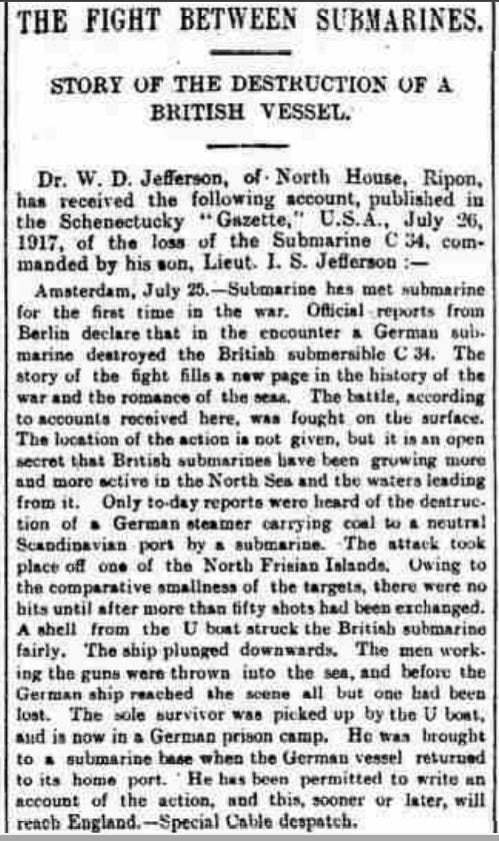 
A rather unusual story appeared  in  the ''Yorkshire Post and Leeds Intelligencer'' based on an article in an American newspaper the ''Schenectuckt Gazette''.


The article describes a battle between an unnamed U boat and the British submarine C34 but contains many mistakes.


It claims the action took place of the Frisian Islands but it in fact took place off Shetland. The location in given in both the KTB and also the submarines orders which were to operate off Fair Isle, Scotland.


It claimed the submarine and U boat exchanged gunfire until, after 55 shots, C 34 was hit ''fairly'' and sank.  The KTB from U 52 clearly shows C 34 was sunk by torpedo and may not even have been aware U 52 was there as no record of any defensive action.


It claimed the men operating the deck gun were thrown into the water and then one of them recovered. C 34 did not have a deck gun.

Stoker Frank Scoble was taken prisoner and ended up in Germany at Brandenburg prison of war camp.
​ 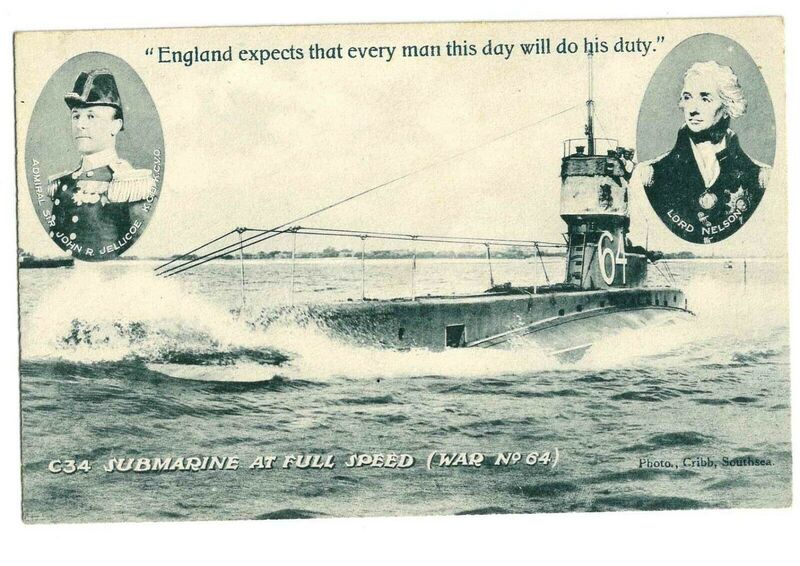 
To date the wreck of the C 34 has not been located.  UKHO gave a position in 1983 of 59 51.00N, 01 05.00W.
This area was searched in 1985 with side scan sonar but no wreck was located and gave the comment  ''CONSIDERED THAT CONTACT IS NO LONGER CLOSE TO ITS QUOTED POSN, IT IS POSSIBLE THAT WRECKAGE HAS MOVED SINCE 1917 IN THE RELATIVELY STRONG TIDAL STREAMS IN THE AREA.''

069 is a large grid square and above Latitude ​longitude is approximately centre of the grid square.
The Crew - (Research ongoing)
We have however, posted two complete profiles of
Lieutenant Ingleby Jefferson and survivor Frank Scoble for the anniversary of C34's sinking. 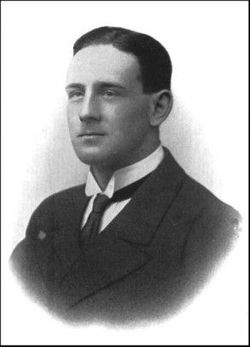 Ingleby was born on 7th January 1893 to Dr William Dixon Jefferson and Mary Stuart Gray and studied at Aysgarth School, situated in the parish of Newton le Willows, recorded aged 8 during the 1901 census.

He had a spell in hospital from 15th October 1914 due to appendicitis; was found fit and returned to service on 3rd November 1914.  Just 3 days before his appointment to Lieutenant, on 12th January 1915, Ingleby found himself in the dockwaters at Immingham, rescuing a soldier of the Manchester Regiment when he fell into the water.  With the water at a depth of 35 feet and in the peak of winter, Ingleby remained with and supported the soldier until a boat arrived to rescue them both.  Ingleby was at the time serving with HM Submarine C21.  For his gallantry and bravery, he was awarded a Bronze Royal Humane Society Medal.

He was a highly regarded officer - his service record in 1917 praised his character “a particularly keen and capable officer in every way” and was a keen sportsman, especially in boxing, football and swimming.

His Star, Victory and British medals were awarded to his father following his death.

He is remembered on a marble plaque in Ripon Cathedral - his Great Grandfather the Reverend William Gray, being Canon of the Cathedral (1829-1863) -  as well as on the Portsmouth Naval Memorial. 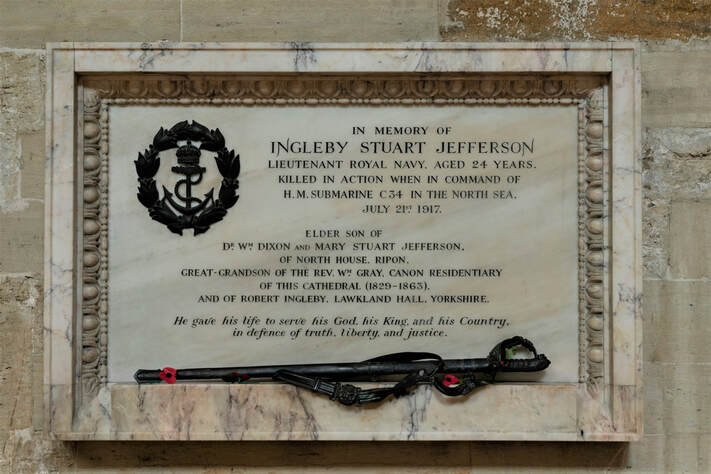 Memorial to Lt. Jefferson in Ripon Cathedral. The date is shown as 21st July 1817 as this is when C34 was posted ''missing'' With thanks to Ripon Cathedral for the image

Born to parents Richard Scoble and Katie Terrill, Frank was actually registered as John Francis Scoble, born on 20th March 1898 (although all Navy documents and the 1939 register date the year as 1896).  The second of 3 children, he had an older brother Richard and younger sister named Edith.

He was recorded on the 1901 census living with his parents and brother Richard in Redruth, Cornwall, aged 3, but by 1911 the family had been separated by tragedy.  His mother Kate had died in the March quarter of 1902 (in childbirth?) - with the possibility of their father Richard not being able to cope with 3 growing children, Richard, Frank (as he was known by then) and Edith lived with their Aunt Mary and her large family.

On leaving school Frank worked as a fish shop assistant, but the call of adventure or a better income prompted him to join the Navy on a 12 year service (initially!). On first entry he was recorded as 5’3” tall, with brown hair and brown eyes, growing to 5’6”, joining HMS VIVID II on 20th April 1914 as a Stoker 2nd Class.  He stated his birth year on this form as 1896, making him 18, instead of the actual 16.  His service record spanned 2 World Wars with an incredible tale in the middle of it…..His story deserves to be told. 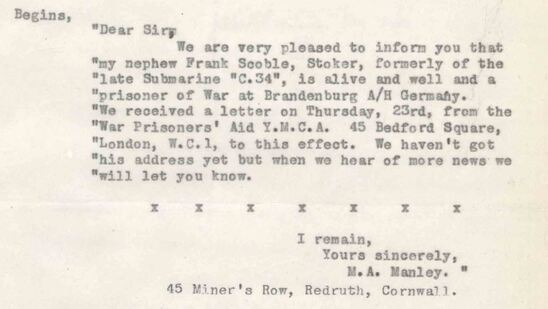 Letter from Frank's Aunt Mary informing Admiralty of his capture - National Archives
Brandenburg Prison of War camp (Brandenburg An Der Havel) was a camp  40 miles west of Berlin. Many Royal Navy and merchant sailor's of various nationality's were held here. Most prisoners would arrive at the camp via barges on the river Havel. 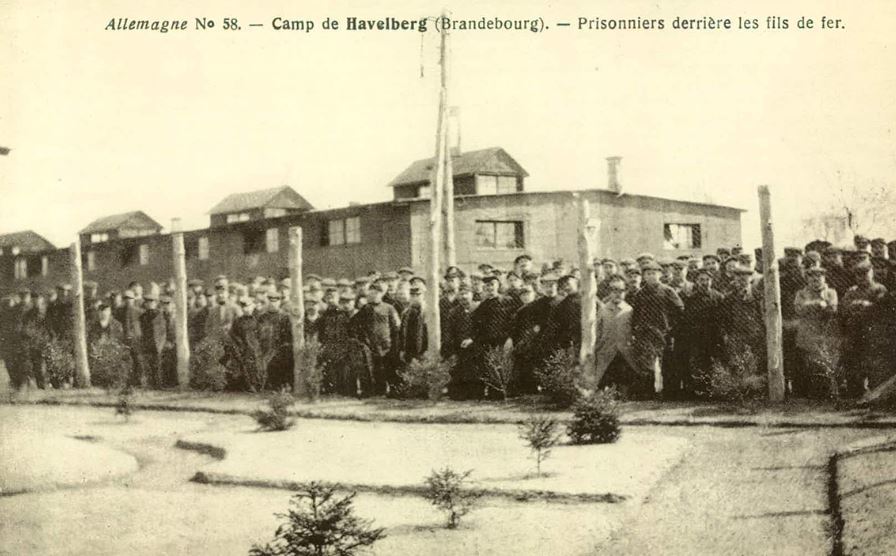 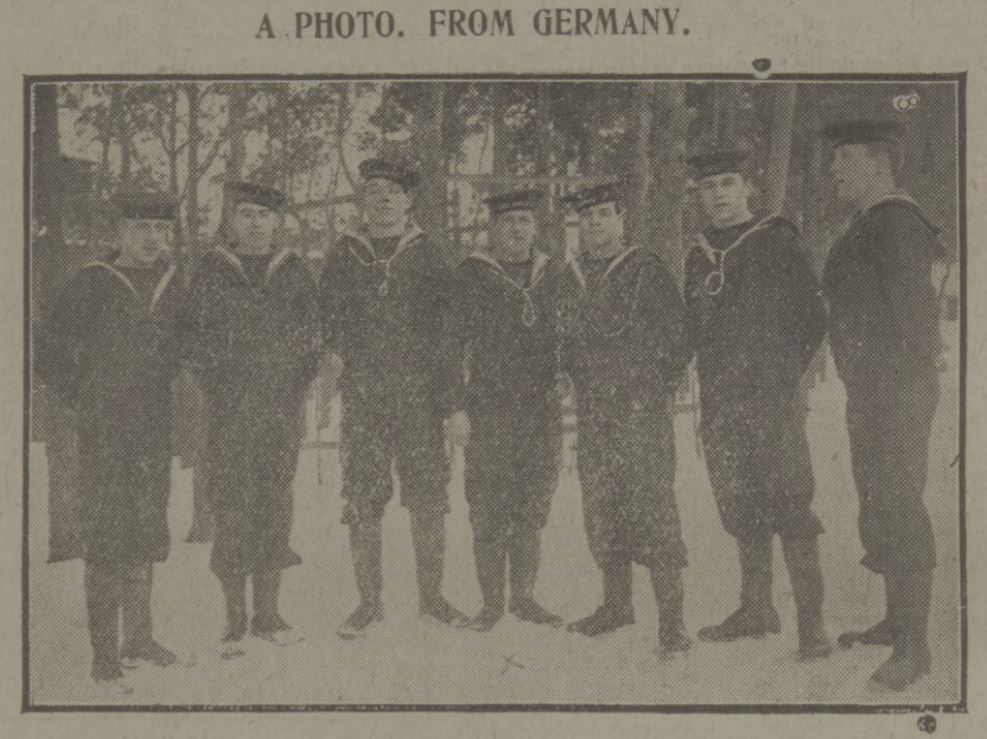 Not much is known of Frank’s life after both wars.  He celebrated his 79th birthday in 1977 and passed away just a week later, having had a life well lived.