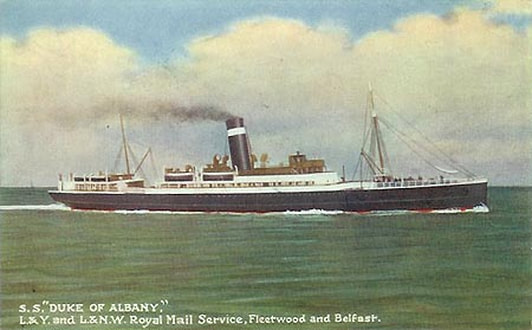 The S.S. Duke of Albany  was built by John Brown & Co. Ltd., Clydebank in 1907 for ​Lancashire & Yorkshire and London & North-Western Railway Co., Fleetwood for the Belfast- Fleetwood route. SS Duke of Albany was hired by the Royal Navy as Armed Boarding Vessel HMS Duke of Albany. 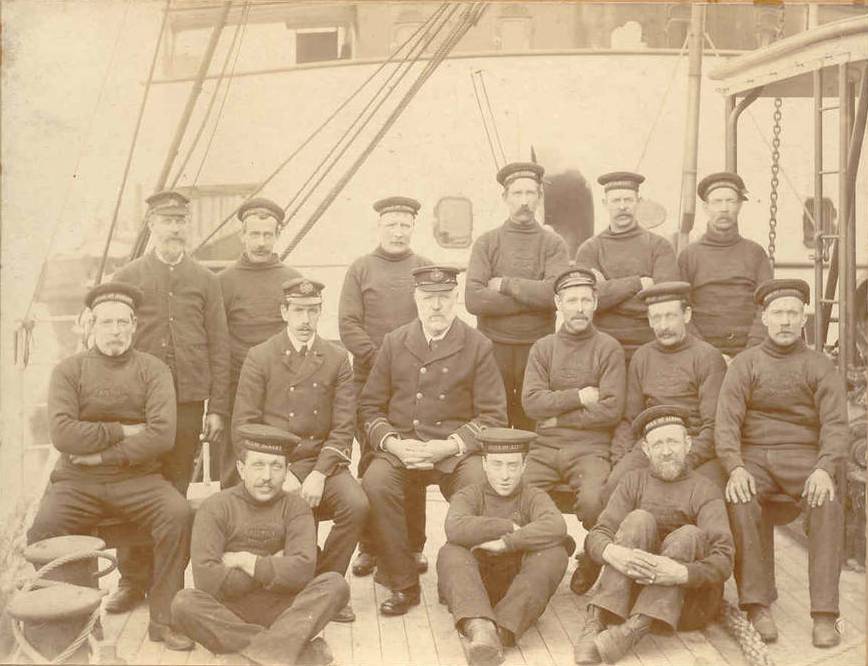 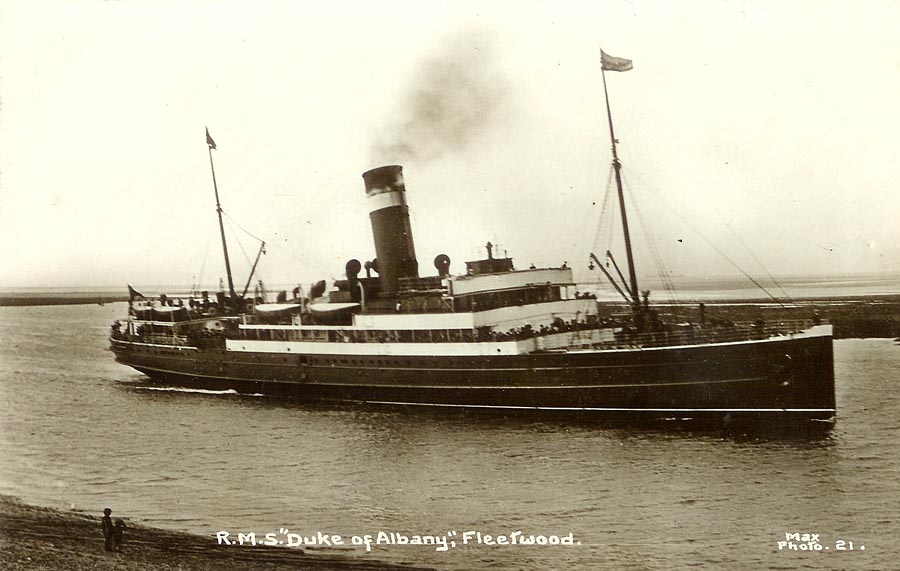 The image on the left shows crew members of the crew of SS Duke of Albany circa 1914. The photograph was kindly supplied by Jennie Ashby who is hoping someone maybe able to identify some of the crew members.
The Loss.
​

​​The following information is taken from evidence given in the Court of Enquiry into loss of HMS Duke of Albany (ADM137/3165).

At 07.00am on 24th August 1916 HMS Duke of Albany together with the Armed Boarding Vessel HMS Duke of Clarence left Longhope to patrol to the east of the Pentland Skerries.

At 09.00 am both vessels being 1 1/2 miles apart in position 58 44N 2 28W and were zig zagging on a true east course. Lt. Leslie, officer of the watch, observed a torpedo, 300 meters distant off the port bow. The vessel was immediately turned away but the torpedo struck the port engine room just a few feet below the waterline at 09.03 am. A second torpedo was then seen passing close to the stern.

HMS Duke of Albany very quickly started to settle. Capt. Ramage appeared in the wheelhouse and asked Lt. Leslie if he had seen anything, referring to the submarine to which he relied no. The order was then given to abandon ship. The blast from the torpedo had destroyed No.4 lifeboat but there were 3 other main lifeboats and a number of rafts and smaller boats.

Capt. Ramage ordered  Lt. Leslie to repeat abandon ship signal then said '' God damn it Leslie I cannot fire a shot''. That was the last that Lt. Leslie saw of the Captain.

Lt. Leslie went below to check on a fellow lieutenant who was ill but found his bunk empty so he left and joined his designated lifeboat. Six minutes after the torpedo struck HMS Duke of Albany sank. As the vessel sank there was a large explosion at the stern which is thought to have been depth charges going off . Lt. Leslie's lifeboat could not get away from the sinking vessel as the swirling water held the boat alongside the ship. One of the lifeboat davits then caught the lifeboat causing it to capsize with 25 crew onboard.

Lt. Leslie found himself under the lifeboat with 6 or 7 other crewmen. He knew one to be a good swimmer and asked him to duck down under the gunwale and see ''if everything is all right''. The crewman tried but could not owing to the buoyancy in his cork lifejacket so Lt. Leslie removed his own lifejacket and swam out from under the boat. On surfacing he found crew on top of the upturned boat with 2 other lifeboats nearby. Instructions were then passed to those still under the lifeboat and all swam out successfully.

HMS Duke of Clarence at once proceeded to Duke of Albany and slipped two life boats near the people swimming and then endeavoured to ram the U boat as a disturbance was observed in the water that was thought to indicate its position. It is reported that this may have been slightly successful as slight metallic shock was reported from the engine room.

The survivors were taken back to Scapa Flow by the HMTBD Menace and HMS Duke of Clarence and most were put onboard the Receiving ship HMS Imperieuse with 3 officers and 13 ratings being taken for treatment to HM Hospital Ship Soudan. Two bodies were also landed that had been recovered from the sea.

Details taken from the KTB for UB-27.
UB-27 was 15 miles east of the Pentland Skerries and spotted two Auxiliary Cruisers approaching from the west. They were reported to be zig zagging.
11.07 am ( Berlin Time) One torpedo was fired at the nearest Auxiliary Cruiser. after exactly two minutes a detonation is heard. Two minutes after the first explosion there is recorded a second, more powerful explosion which is thought to be either the boilers or ammunition exploding. The ship is seen to sink deeper.

21 minutes after the detonation the U boat in 11m. The KTB records the Auxiliary Cruiser has sunk and in the area of sinking are lifeboats. The other Auxiliary Cruiser steaming around at high speed with all the crew on deck. The ship is estimated to be 3000 ton. For an hour UB-27 tries to get in a good firing position to fire torpedo but cannot.

12.35 pm (Berlin Time)  An aircraft is spotted flying towards the U boat. In the west a lot of  smoke clouds were observed. There was no opportunity to fire and battery was getting flat.

2.00 pm (Berlin Time) 10m. through the periscope right astern of the U boat a small airship with gondola  was observed. Its considered to be acting with the search flotilla. Due to the condition batteries the U boat will run at low speed for 7 hours until dark when the search should be called off.

In 2002 a fisherman in Wick had given Kevin Heath the position of a large wreck in position 58 42.5N 02 24.2W. This was considered to possibly be the wreck of HMS Duke of Albany.
​
A wreck was located 2006 by Netsurvey while conducting a survey off the M.V Anglian Monarch in position 58 42.687N  02 24.007W. In 2006 SULA Diving of Stromness established the identity as HMS Duke of Albany. This was achieved by analysis of the multi beam image matched against the ships plans and known details of design of the ship, archive research into the sinking of HMS Duke of Albany and the U boat KTB. 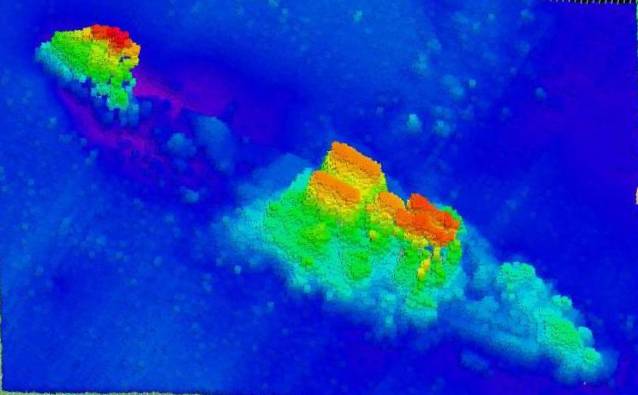 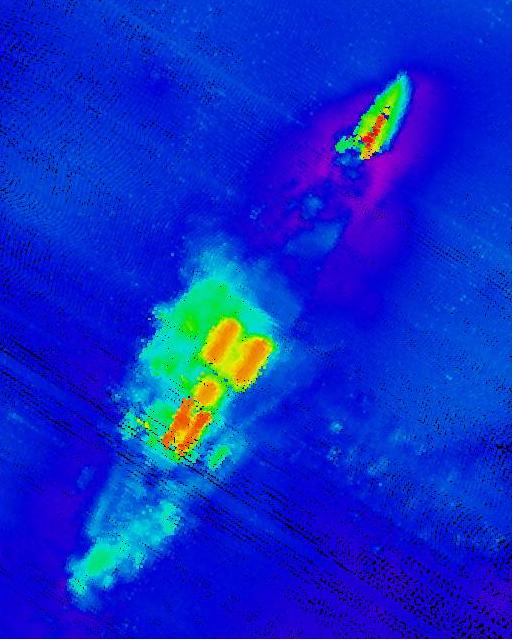 ​The identity was confirmed when a dive team led by Leigh Grubb, diving off the M.V Jean Elaine, recovered the ships bell.

After the wreck was formally identified it was then made a Protected Site where it can be dived but must not be touched. 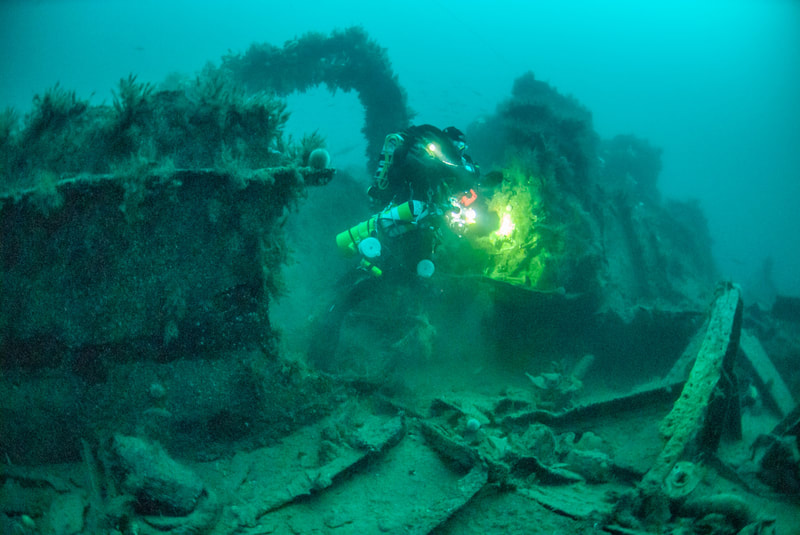 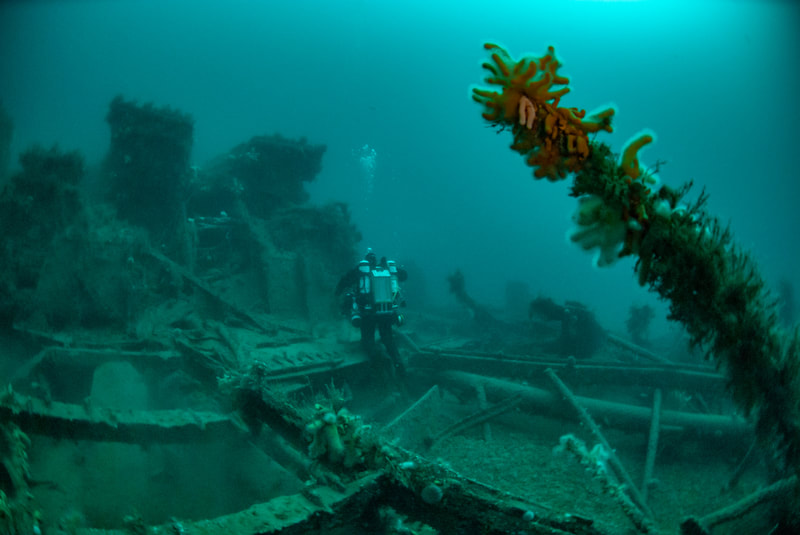 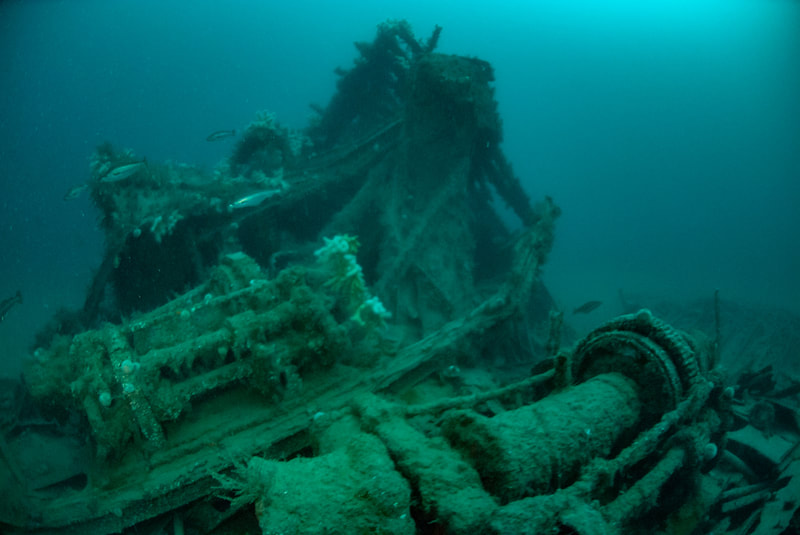 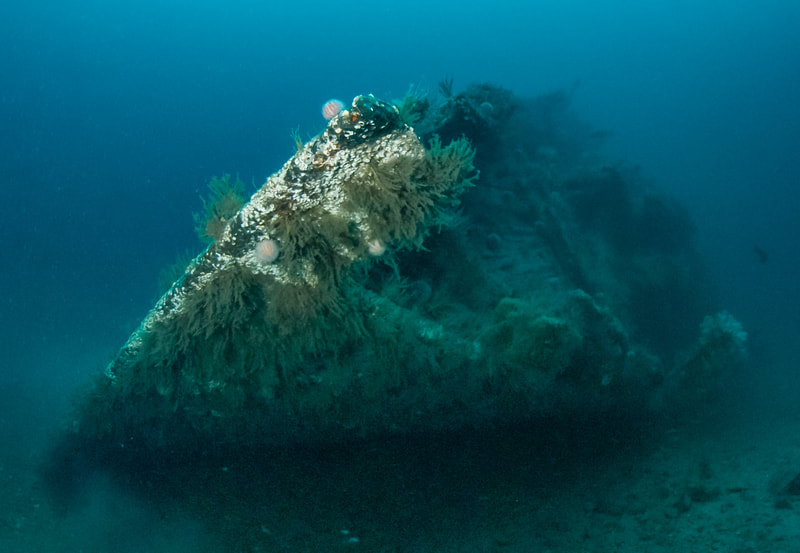 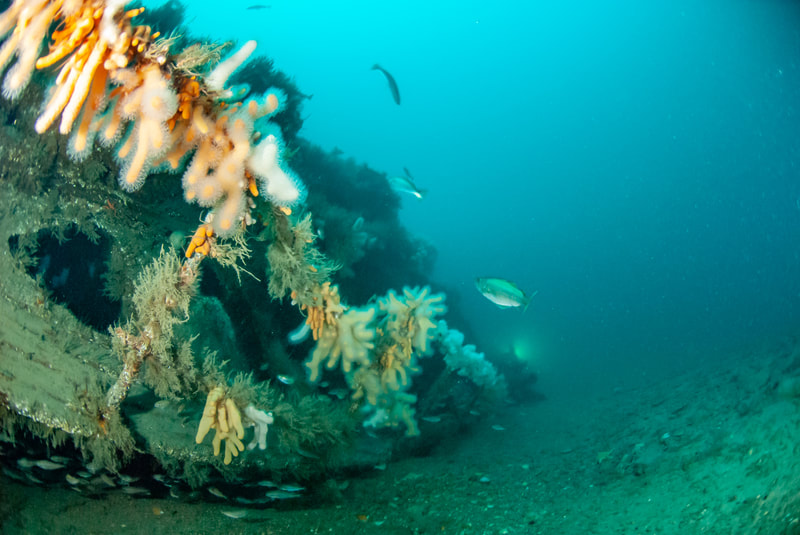 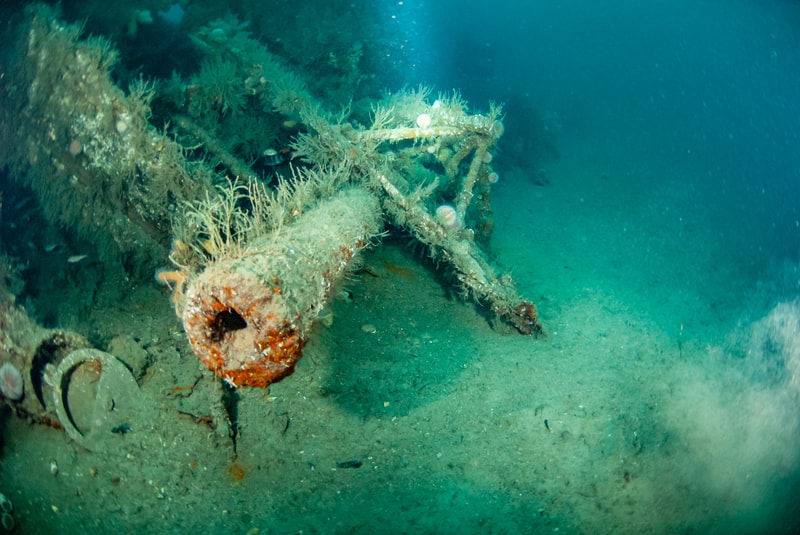 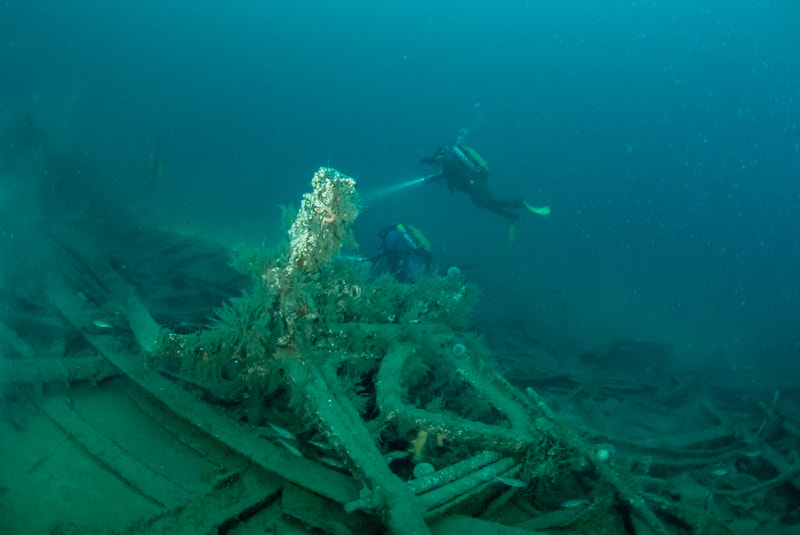 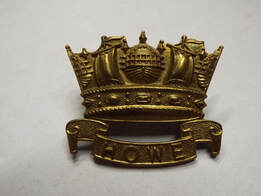 Name - Ralph Frank Carey
DOB - 6th September 1894
Place of Birth - Redhill, Surrey
Parents - George and Matilda
Early History - Baptised on 25th November 1894 in St Matthew’s Church, Redhill.
In the 1901 census Ralph was aged 6, the middle of 5 children.  The family lived at Lowers Cottage, New Road, Denton, Newhaven, Surrey.  They continued to reside at the same address for over 10 years, noted at the cottage again during the 1911 census; Ralph was aged 16 and worked as a farm labourer.

Service History - Ralph was working as an engine cleaner with the London, Brighton and South Coast Railway when he enlisted on 3rd April 1912 as an Ordinary Seaman within the RNVR, described as 5’4” tall with brown hair and grey eyes.  He was attached to the Howe Battalion on 22nd August 1914 (C/69 22/8/14-28/10/14) serving in Belgium in 1914 and awarded the 1914 Star.  On returning home he was drafted to RN Depot Portsmouth and transferred to HMS CALYX on 28th November 1914 serving for 4 months before returning to Portsmouth and HMS VICTORY I.
His next posting was to the AMC ALCANTARA, from 15th April 1915  to 31st March 1916, returning to HMS VICTORY for a month.  His final posting was to the DUKE OF ALBANY, which was attached to the dockyard repair ship HMS VICTORIOUS, on 29th April 1916 until the ship was torpedoed.

Name - John Douglas Walker
DOB - 7th January 1889
Place of Birth - Douglas, Isle of Man
Parents - William Walker and Annie Briscoe
Early History -  John was first recorded on his baptism records and then on the 1891 census aged 2. He, along with his parents and 3 siblings lived at Frederick Street in Douglas, his father a waiter.  The family can’t be found on the 1901 census on the Isle of Man, but within another 10 years only his mother and John lived together at 8 Harris Terrace, Douglas.

Service History - He enrolled with the Reserves on 30th October 1909, recorded as 5’3” tall, with brown eyes and a ruddy complexion, training at Devonport Depot and HMS ARROGANT in December 1909 to the end of March 1910.  Before the war he worked on vessels BEN-MY-CHREE, HOLLY BRANCH, CAMPANIA and SAXONIA, sailing to mainly New York, rated as an Able Seaman.  While retained with the RNR John undertook Navy training which happened every other year; attached to HMS CAESAR in 1911 and HMS PRINCE OF WALES in 1913.  He also passed requirements for signalling and was rated as Leading Seaman on 22nd April 1915.  He was attached to HMS VIVID on the outbreak of the Great War, and posted to serve aboard HMS DUKE OF ALBANY on 18th November 1914.  Sadly his release from the ALBANY came all too late - he had notice that he could be discharged from the RNR due to being accepted for employment as a Junior Officer in the Mercantile Fleet Auxiliary on 29th October 1916, two months after his death, after gaining his certificate of competency as Second Mate (for foreign-going steam ships) on 10th June 1916.

A single man in life, his pension was awarded to his widowed mother after his death.

Name - John Charles Atkinson
DOB - 3rd March 1884
Place of Birth - Lewes, Sussex
Parents - John and Fanny
Early History -  Aged 7 on the 1891 census, John and his family lived at 38 Essex Place, Newhaven.  During the next 10 years they moved house but stayed within the parish of Newhaven and were recorded in the 1901 census, at 1 Elphick Road. John was aged 19 and worked at the time in a cement works as a labourer.
He was still labouring ten years later, recorded on the 1911 census.  He was the only child that had remained living with his parents at this time - the house was still full however, at 8 Meeking Rise, Newhaven with two extra boarders.

Service History - Recorded as 5’8” tall with light brown hair and blue eyes, John first enlisted on 27th July 1909 with the RNVR Division and on the outbreak of war was transferred to the Royal Navy Division on the 9th August 1914 until 27th November 1914, serving with the division at the Siege of Antwerp.  He transferred to HMS CALYX on 28th November 1914 serving for 4 months before returning to Portsmouth and HMS VICTORY I.
His next posting was to the AMC ALCANTARA, from 15th April 1914 to 31st March 1916, returning to HMS VICTORY for a month.  His final posting was to the DUKE OF ALBANY, which was attached to the dockyard repair ship HMS VICTORIOUS, on 29th April 1916 until the ship was torpedoed.