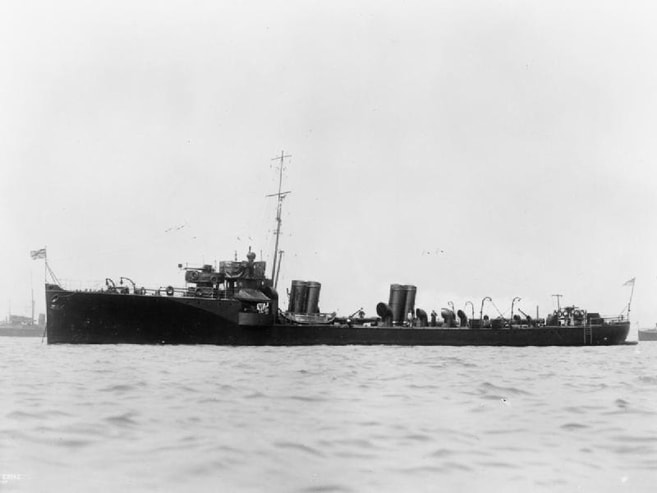 SAW THE U l8 SUNK. SURVIVOR FROM THE ERNE. Perhaps the only man who hails from Thanet who was on H.M.S. "Erne,'' destroyer, which was sunk off Rattray Head, Scotland, on the 6th February, after running against some rocks is Stoker W. S. Lee, whose home is at 8 Gordon-Square Birchington.
In an interview Stoker Lee said that on Saturday week about three o'clock in the morning they were sailing from Jarrow in a terrific storm. The sea was high, and the wind blew with tremendous force.
Whilst the vessel was being buffeted about she struck a rock, and commenced making water. At the time there was no other vessel near, and it was not until seven o'clock that they were seen, and eventually rescued by means of life saving apparatus and taken to Peterhead, and later to Aberdeen. The crew numbered 72.

''We endeavoured to lower the boats," said Stoker Lee. "but they were all smashed by the rough sea. No sooner had the boats touched the water than they were broken The officers all acted with calmness, and only very few were lost . After these experiences, Stoker Lee has returned home for a few days. and went back again this Wednesday to headquarters.
As regard to actual engagements with the German Navy, Stoker Lee has not been in any naval battles but he was with HMS ''Garry" when the German submarine U 18 was captured in the Pentland Firth. Stoker Lee said they could see the periscope of the submarine coming along the water, but she was not in sight long before a well-directed shot from the ''Garry''  smashed the periscope. All the German sailor's, but one were rescued and taken to Edinburgh, one that remained went down with the submarine to avoid the English getting the vessel.

In reply to your confidential letter (No.633R) of todays date enclosing a letter from the Secretary of the Admiralty and one from Admiral R.S. Lowry regarding the salvage of H.M.S. ''Erne'' I beg to state that if the salvage is taken in hand immediately and without a moment's delay, both port and starboard main engines, all the pumps and copper piped can be salved, but in view of the fact that the sand is light this matter would have to be undertaken at once, otherwise the vessel will bury herself in the sand and there will be no chance of either recovering the machinery or selling the ship. I may also add that there is one manganese bronze propelloor which I think with some little trouble could be salved.

As you are no doubt aware, I salved all the principal deck fittings, including standards, telegraphs, steering gear, compasses and torpedo tube platforms and handed them over to the store at Peterhead.

In conclusion, I should like to say that it is only possible to salve the balance (which I should estimate would be valued at some £10,000 - £12,000, providing the work was undertaken without a moments delay.  I should also like to add that while I was on the salvage of the vessel, one of the engineers had one of the pumps working in twenty minutes, showing that the internal workings are in good order. Her main engines also appear to be in pretty good condition and I should estimate the cost of getting the whole lot into Peterhead and put on board a ship would not exceed £2,000.

I am
Sir,
Your obedient servant,

In accordance with your instructions I have made an inspection of this vessel as she lies on the beach approximately 800 yards to the south side of the Rattray Head Light House.

I find as follows

The vessel has settled in the sand to a depth of about 4'; the sand having banked on the seaward side and shore side of her until a pool has been formed round the vessel, the depth of the pool varying from 8' aft over both quarters to 3' amidships and 7' to 8 ' forward.  This pool retains the water at the lowest tide and therefore have to be pumped out daily for the purpose of stripping the ship prior to operations being commenced.

The beach at this point is constantly shifting and the vessel has been completely sanded up and also comparatively clear during the past two months according to to information obtained on the spot; this is quite comprehensible when the shifting of the beach during the receding tide this morning was plainly visible and contour of the banking both on the inshore and seaward side was constantly altered notably at the part of the beach which was to all intents and purposes dry at half tide on the inshore side of the vessel amidships and which gave me just 3' of water alongside at low water.

The vessel's  back is broken just abaft forward boiler room the decking being fractured and side plates buckled on starboard side at this point; the buckling of the plates indicates that the bow has tended inshore while the after part has remained stationary.

The fore compartments to a point immediately abaft the bridge are holding water and appear to be comparatively tight the tidal flow only making itself apparent abaft this portion. I understand that the forward are tightened by hose who have been working on the vessel previously and that they were filled with water on salvage operations being relinquished in order to prevent the vessel being driven further up on the beach.

I find it impossible to make a survey of the vessel internally without diving gear owing to the water in her which reached close to the top of the engines in the engine room and the same height in the cabin. The fore part of the vessel in on the move at high water but abaft the fracture amidships she remains absolutely set.

The engines and boilers do not appear to be set up or displaced from levels I have taken from parts exposed above water.
At high water the whole of the vessel is under water abaft the bridge. The time available for stripping operations under the most favourable circumstances will not be more than 6 hours daily.

The following alternatives present themselves under the above conditions:-

(1) To cut the vessel in two at point of fracture and float forward portion stripping remainder as occasion offers.

(2) To leave the vessel as she lies and strip her throughout as occasion offers.

(3) To let her out to contract at a price per ton of all metals salved and conditional prices for engine and boilers delivered in           r       reconstuctional condition.

(5) To keep a watching crew stationed by her during the winter to collect what they can as she breaks up and if occasion should     w       warrant it work her next summer.

The main obstacle to removing stuff from the wreck is the beach, extending for 200 yards, soft sand, to the foot of the sand hills, very nearly half a mile of sand hummocks have to be negotiated to the road, the nearest point, where any conveyance can be loaded with a view to transport to Peterhead or elsewhere - a baulk track or light railway would be the only means of shifting the heavier portions of machinery or boilers from the wreck to the roadway. This would entail constant attention on account of the shifting nature of sand.

No vessel of more than 3' 6'' draft could safely approach the wreck for loading purposes and that only under the most favourable conditions of tide and weather.

From a financial point of view the first proposal appeals to me as being risky and failing in soundness.

The second proposal entails waiting for opportunity as regards weather and would mean that labour, skilled and unskilled,  would have to be obtained at a moment's notice and transported to the wreck, a distance of 10 miles, as occasion for work required.

The third proposal should work out on a financial sound basis and would relive the department of any expense further than a subordinate officer in charge when the contractor was at work and a watcher at other times.

As regards the forth proposal, if a purchaser can be found no doubt this would be the most advantageous means of disposing of the matter, always having a view to the price paid being consistent with the value received by the purchaser.

The fifth proposition is the only one which I would advocate as regards Admiralty work on the vessel.

The flow of water, heavily loaded with sand throughout the engine room of the wreck will in my opinion have rendered the major portion of the machinery useless for further practical application without considerable financial outlay.

With regards to the estimate made as to value of salvable material remaining in the vessel by a previous salvage officer, I can find no basis quoted in his report to work on; it is probable that a fair estimate of the actual tonnage of copper and brass put into the vessel when she was first constructed might be obtained from the builders which would provide a basis for forming a sale price of the vessel as a whole; boilers &c, can of course be valued from original specifications and written down to date for depreciation with allowances for present condition, in this way a quotation for sale could be arrived at and an acceptance price placed.

The matter of salvage as an Admiralty undertaking is wholly speculative and there is no ground whatever to form a basis from which to draw a definite conclusion as to results.

The vessel has commenced to break up.

The weather at this time of year is most unreliable.

The beach on which the wreck is situated is constantly shifting.

The nearest point to obtain labour is 10 miles distant.

All materials salved will have to be transported over half a mile of sand hummocks and beach to the road at very considerable cost and then carted to the nearest station for transport to place of sale.

Under these circumstances I am of opinion that the safest proceeding from a financial point of view is to sell her as she is giving particulars as to tonnage of metal she has on board and a provisional undertaking to take the engines and boilers off the purchaser at a given price provided they pass inspection of an Admiralty expert when salved. 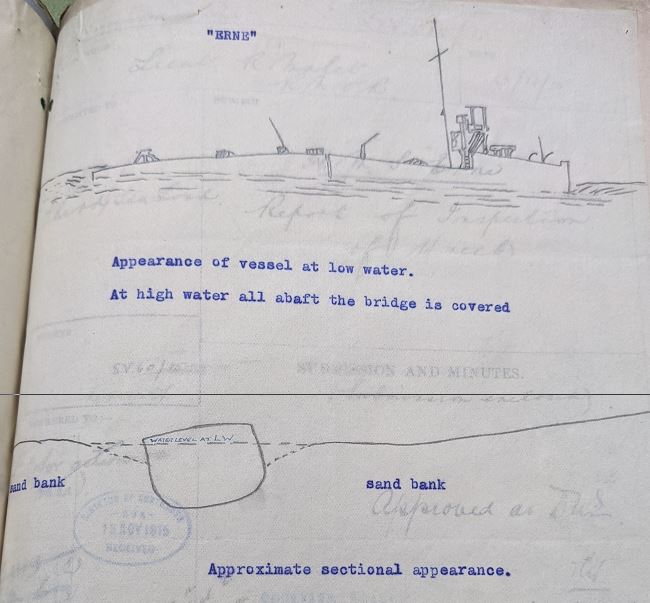 ​Re  Admiralty telegram 1819  '' it has been decided to sell the wreck of ERNE as she is. Further communication will be made.

​There is no UKHO wreck card for HMS Erne.

​Photographer Kevin Hay captured the image below of what's left the wreck of HMS Erne after extensive salvage has taken place following the stranding. 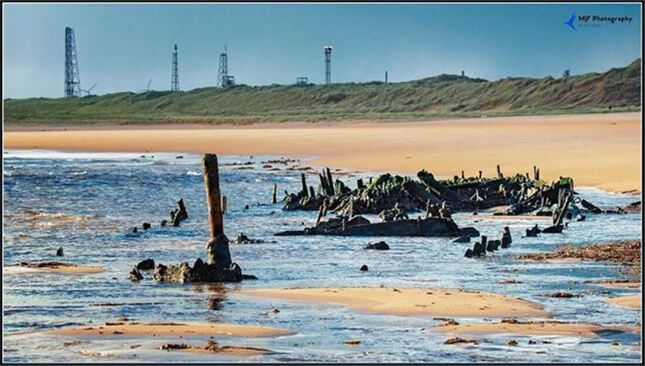