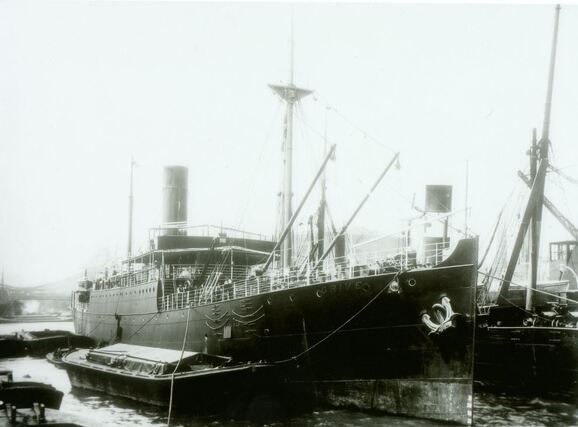 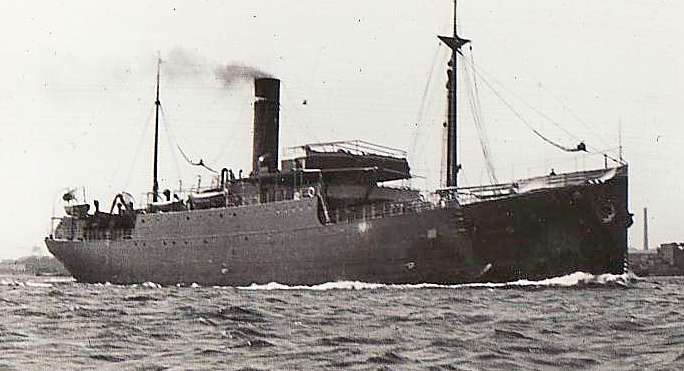 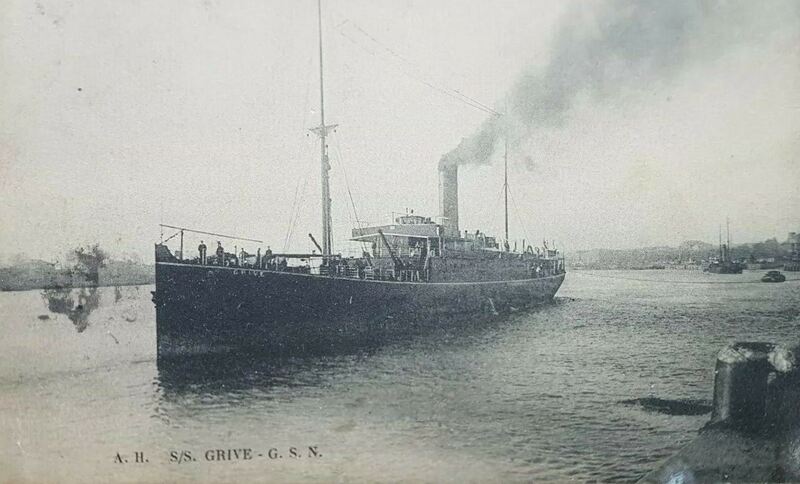 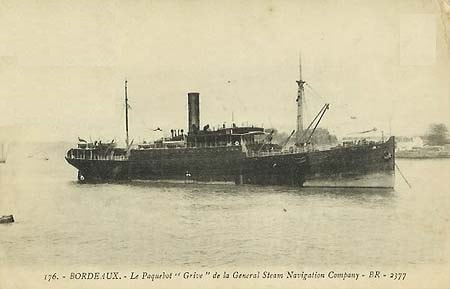 Taken from evidence given in the Court of Enquiry into loss of HMS Grive -ADM137/3712. ​
On the 8th December 1917 HMS Grive was approaching Shetland having sailed from Murmansk, Russia with HM Yachts, HM trawlers and other Armed Boarding Vessels. At 1.25pm when five miles east of Bard Head, Bressay there was an explosion under the stern. No periscope was seen or torpedo track and it was unclear if the ship had been torpedoed or had struck a mine. Considerable damage had been done to the stern, steering gear, crew quarters were badly damaged, the stern post and propeller blown away.

Number 3 & 4 holds were flooding and HMS Grive was settling by the stern. The engine room was abandoned as engineers said nothing more could be done so all unnecessary crew left in the ships boats and were taken onboard HM trawlers.

HMT Sparrow and HMT Strathrye passed wires to HMS Grive and towed the vessel into Bressay Sound. The holds on Grive were packed with wood to allow ship to remain afloat if torpedoed. Once in Bressay Sound the tug Peewit took over the tow and the trawler Sir Mark Sykes tied alongside to help manoeuvre ship.
At 5.20pm HMS Grive was beached in Lerwick.

After some repairs it was decided to tow HMS Grive for dry dock. The tugs Pursuit, La Valleta, Peewit and HM Trawlers Saxon, Lord Lansdowne and Tenby Castle left Lerwick in calm weather but with poor weather forecast. The weather worsened as the boats approached Orkney and HMS Grive started taking on water. The tug La Valleta fouled her propeller with the tow rope and the tow became unmanageable. At some stage the Tug Peewit had become separated and could not be contacted to provide assistance. ​
Taken from KTB UC40.

Despite the uncertainty onboard HMS Grive on the 8th December as to the cause of the explosion it was a torpedo from UC40 (Kptlt Hermann Menzel ) that had done the damage. UC40 reports firing one torpedo and hit the ship in the stern. Menzel reports ship not sinking but unable to fire another torpedo due to the amount of vessels patrolling the area after the attack.

''6.00pm Signal received from HMS Grive that vessel is sinking and the crew will abandon ship. Standing by to pick up boats. Picked up 18 men from one boat and continued to stand by ship in company with HMT Saxon and Lord Lansdowne & tugs Pursuit and La Valleta.  HMS Grive sank. Received orders from HMS Saxon to proceed to Kirkwall with survivors.
Dennis Hd Lt House bore WSW dist. 3 miles''.
​
​The Wreck Today.
A wreck was located in 2001 in position 59°25,199'N  02°21,168'W, in 55m of water, by Netsurvey on the MV Anglian Monarch. In 2008 SULA Diving of Stromness established the identity as HMS Grive. This was achieved by analysis of the multi beam image matched against the ships plans, archive research, and obtaining a copy of the logbook of HMT Tenby Castle which gave the position of the sinking.

The wreck was first dived in 2010 by a group, which included Matt Outram & Richard Ayrton, diving off the Stromness boat MV Jean Elaine, skippered by Andy Cuthbertson.

​​The identify was confirmed later in 2010 when the bell was recovered. 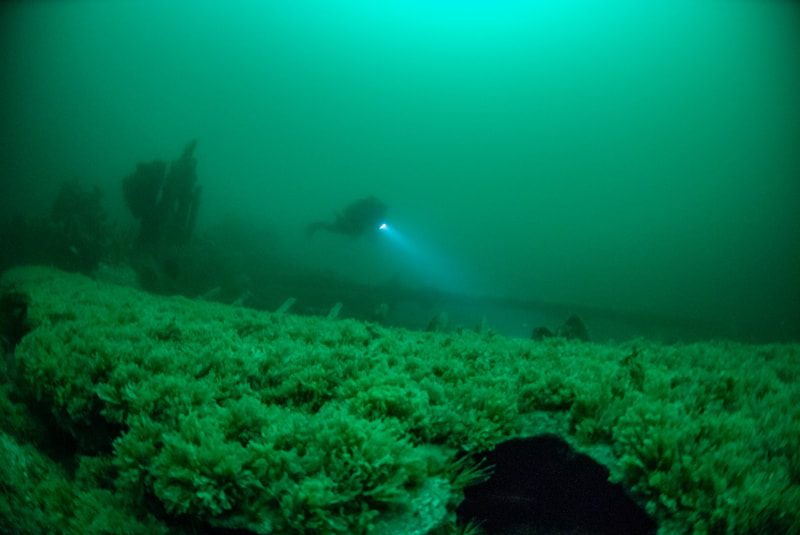 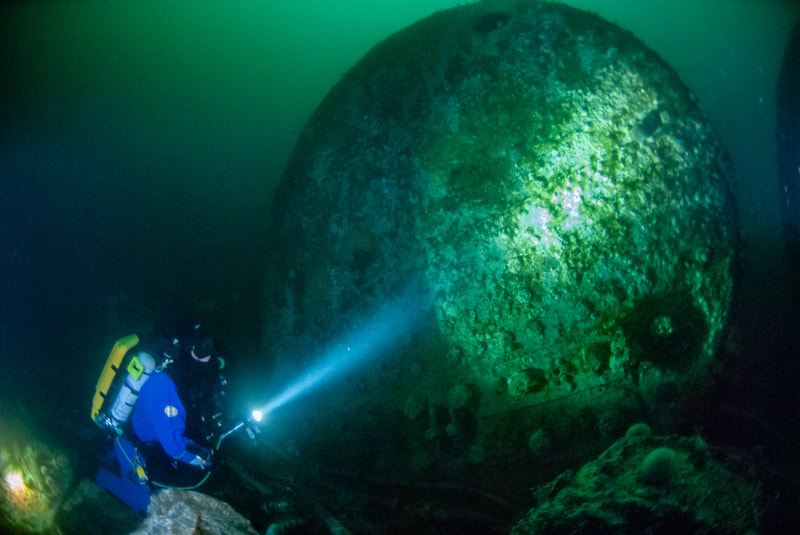 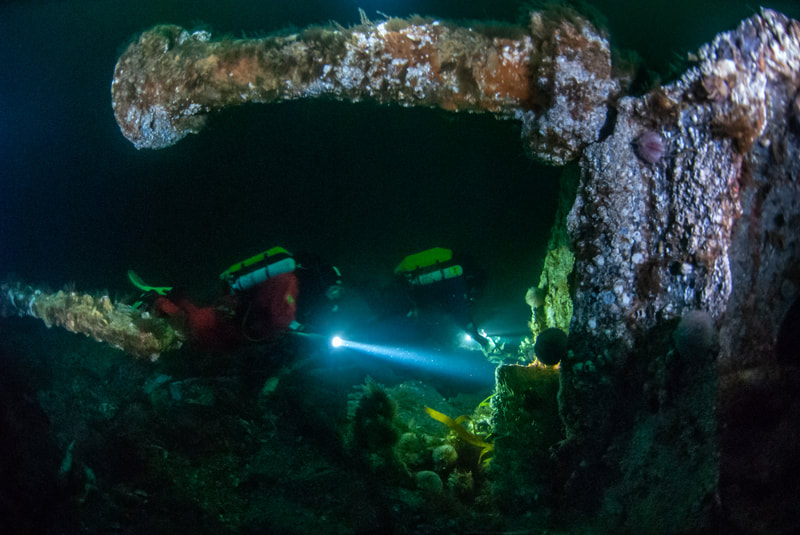 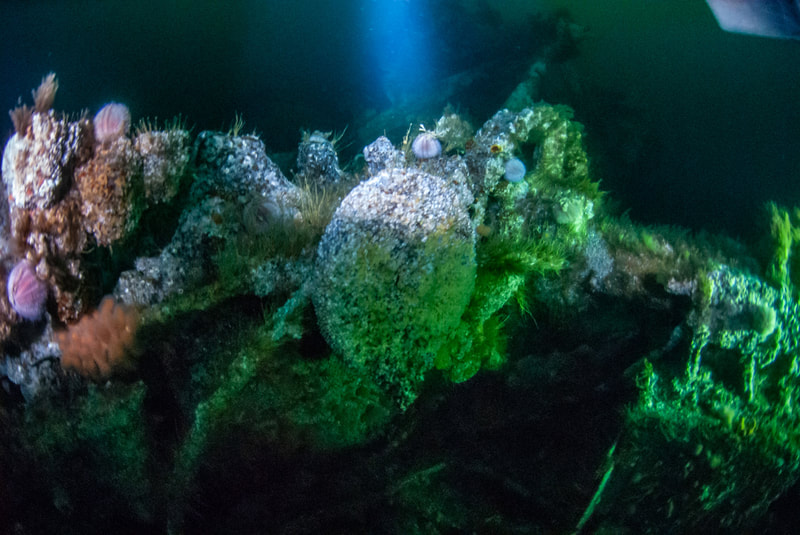