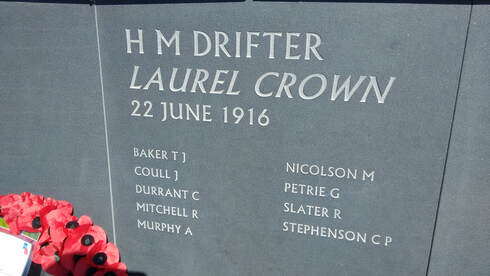 The wooden drifter Laurel Crown was built by Scott & Yule , Fraserburgh in 1913 and registered in Fraserburgh as FR506 by the West family.

On the 22nd June 1916 while on minesweeping duties to the west of the Orkney mainland, HMD Laurel Crown struck a mine and quickly sank with the loss of her entire crew of nine men. It is thought that the mine she struck was part of the same minefield, laid by U 75,  which caused the sinking of HMS Hampshire 17 days previously on 5th June 1916.​

ADM 171/197. Naval Medal and Award Rolls 1793-1972/WW1 Medals & Awards/Service lists of Naval Ships
The Wreck Today. ​
No surveys have yet located the remains on HMD Laurel Crown. In 2016 SULA Diving conducted a survey for Historic Environment Scotland. The aim of the survey  was to try and locate HMD Laurel Crown for the 100th anniversary of the sinking.

Following a survey in 2008 two ''obstructions'' were added to Admiralty chart 2249. These contacts were investigated during the SULA Diving survey and  proved to be large rocks.