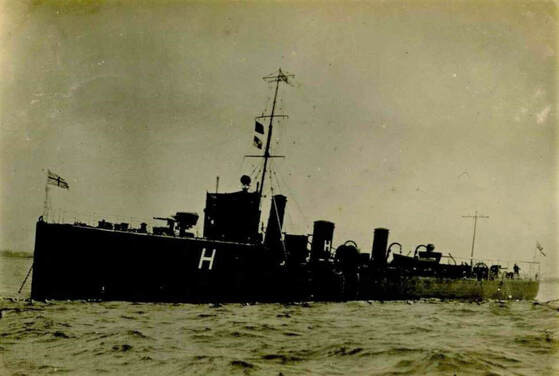 ​Lieut. Gerald F. W. Addison. Of H.M.S Hope, was drowned today at sea and Engineer Lieut. Frederick Kelley, belonging to the same ship, was injured. The Hope along with with Second Destroyer Flotilla was proceeding to Kirkwall from Longhope, Orkney, and whilst  in Holm Sound met with mountainous seas. One of these broke on board the Hope, carrying away the after hatchway and sweeping Lieut. Addison overboard. He was never seen again. Engineer Lieut. Kelly was struck by the debris, but his injuries are not serious.


BLUEJACKET WASHED AWAY reported in our late editions yesterday the Second Destroyer Flotilla encountered a strong gale and very heavy seas in the course of voyage from Longhope to Kirkwall yesterday. The Hope was struck when near Moulhead a huge wave, washed Lieut. F. W. Addison overboard, and he was drowned. Lieut. Addison, Eng.-Lieut. Kelly, and a lifebuoy sentry were standing on a hatchway when the sea which carried Lieut. Addison away struck the vessel. Lieut. Kelly and the sentry were knocked down and rendered unconscious, and the officer was taken hospital when the vessels reached Kirkwall.
The men declared that they had never experienced such weather in destroyers.

During Thursday’s severe weather in the Firth of Clyde a seaman belonging to H.M.S. Assistance, at Lamlash. was washed off a steam pinnace and drowned. The body has not yet recovered.

​Lieutenant Gerald F. W. Addison, was a son the late Mr. Albert Addison, former Mayor of Portsmouth and afterwards Clerk the Borough Magistrates. He was born during his father’s year of office, and silver cradle was presented Mr. and Mrs. Addison in commemoration of the event. Lieut. Addison, having passed through the Royal Naval College at Dartmouth, became midshipman May 15th, 1904, and was promoted Sub-Lieutenant three years later. He was made a Lieutenant in April, 1910, and was appointed to the Hope, second-in-command, in April 1911.


THE CRADLE OF THE DEEP.

Bereavement has fallen on a well-known Portsmouth family by the death in a gale at sea of Lieut. Gerald F. W. Addison, who was serving as second in command on the destroyer " Hope," with the Second Destroyer Flotilla. Near Moulhead, in the course of a voyage from Longhope to Kirkwall, the " Hope" was struck by a big sea, which carried the Lieutenant overboard, and he was never seen again. Lieut. Addison's father. the late Mr. Albert Addison, was a former Mayor of Portsmouth, and the Lieut was born during his father's year of office. A silver cradle was presented to Mr. and Mrs. Addison in honour of the event.

Lieut. Gerald Frederick William Addison was washed overboard from the destroyer Hope on the 9th inst.

Lieut. Addison passed out from the Britannia April, 1904, fifth on the list, and was appointed as Midshipman to the Centurion on the China Station May 15 following, subsequently serving in the Irresistible, the Mediterranean and the Britannia in the Channel Fleet.
​
He became Sub- Lieutenant July 15, 1907 and served in the Sutlej and in Donegal the Fourth Cruiser Squadron, and on April 1, 1910 he was promoted to Lieutenant. Since then he had served in the Leander, depot ship of the Fifth Destroyer Flotilla, at Devonport, and commanded Torpedo-boats No.073 at Sheerness and No.077 at Portsmouth. He was appointed to the Hope, Second Destroyer Flotilla, in April 1911.

THE DROWNING OF A NAVAL OFFICER.

​Lieut. Gerald F.W. Addison, who was washed overboard and drowned from the destroyer Hope during a severe gale while the vessel was on passage from Longhope to Kirkwall on the 9th inst., was a son of the late Mr Albert Addison, a former Mayor of Portsmouth. He was born during his Father's Mayoralty in 1888, and a silver cradle was presented to Mr and Mrs Addison in commemoration the event. Mr Addition, after passing through the Dartmouth Royal Naval College as a cadet, became a midshipman on May 15th, 1904, and was promoted to lieutenant three years later. In April 1910 he was advanced to the rank of lieutenant and appointed to the Hope in April 1911. He was considered as a most promising young officer, and much sympathy has been expressed for his relatives.

Referring to the accident the Naval and Military Record says:—Only bare details have as yet come to hand as to the manner in which Lieut. Gerald Addison, of the destroyer Hope, met his death. In company with the other vessels of the Second Flotilla, the Hope was proceeding from Longhope to Kirkwall, and in rough weather which was encountered Lieut. Addison was washed overboard. It is to be hoped that a close inquiry will be held as to the part which the deck of the ship itself may have played in the accident.
​
The steel decks of our destroyers are extremely slippery, especially in wet weather, and the most experienced seaman is liable to be thrown down when the vessel is running through a rough sea unless he can keep hold of some fitting. Only a fortnight ago it was recorded that an officer of a vessel in the First Flotilla narrowly escaped death in a similar fashion, being saved by catching hold of the wire rail when his legs and the better part of his body were well over the side.

The after part of the destroyers where Lieut. Addison was when swept overboard is rendered particularly dangerous. It is covered with cork linoleum, which become exceedingly slippery when washed down and the danger is increased by the habit which prevails of removing stains with the aid of Broxburn oil, the use of which converts the line into a veritable skating rink. Considering the extent to which such small craft as destroyers are at the mercy of the weather, the Admiralty might well consider the advisability of covering the whole of the deck with coconut matting, or some other substance that would reduce to a minimum the risk of losing one's foothold. Lieutenant F. W. Crowther has been appointed to H.M.S. Blake, additional for the destroyer Hope as First Lieutenant for navigation duties, in place of the late Lieut. Addison. Engineer-Lieutenant.
​G. H. Hertzell has also been appointed to H.M.S Blake additional for the destroyer Hope, in place of Engineer-Lieutenant Kelly, who was injured by being knocked down by the sea that carried Lieut. Addison overboard. Mr Kelly, who is in Balfour Hospital, is making satisfactory progress. 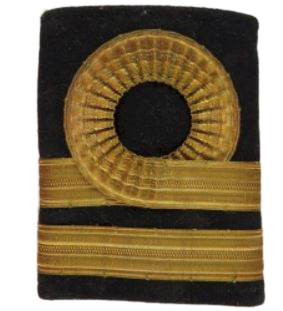