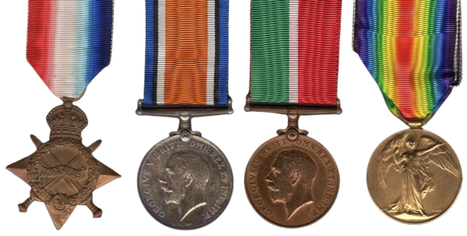 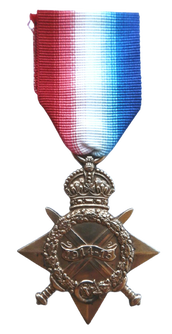 Individuals could only receive one of these two medals.  The 1914-1915 Star was never awarded on its own as once military personnel qualified for this medal they were automatically entitled to the British War Medal and Victory Medal.

The Name, Rank and Number were stamped onto the rear.

This medal was given the nickname ''Pip'', a dog, from a British strip cartoon published in the Daily Mirror from 1919 to 1956​.
British War Medal ​ 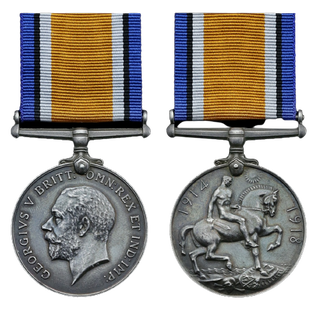 This silver medal was issued to British and Imperial Forces who served overseas from the outbreak of war to the Armistice of 11th November 1918. Members of the Red Cross were also entitled to this medal. It was the most common British campaign medal awarded, over six million were awarded. 100,000 bronze medals were awarded to members of the Labour Corps and other units raised in the British Empire.

The Name, Rank and Number are engraved around the edge of the medal.

​ This medal was given the nickname ''Squeak'', a penguin, from a British strip cartoon published in the Daily Mirror from 1919 to 1956.
​
The Victory Medal 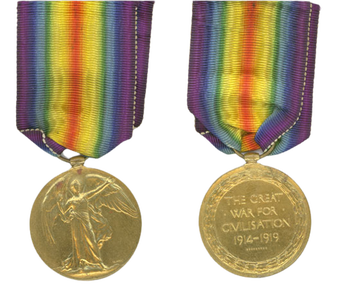 This medal was only issued to those awarded the British War Medal and who had been part of a military unit that had engaged with the enemy in a theatre of war.

​The Name, Rank and Number are engraved around the edge of the medal.

This medal was also awarded for mine clearance in the North Sea between November 1918 and November 1919 and for participation in the Allied intervention in the Russian Civil War up to 1st July 1920.​ 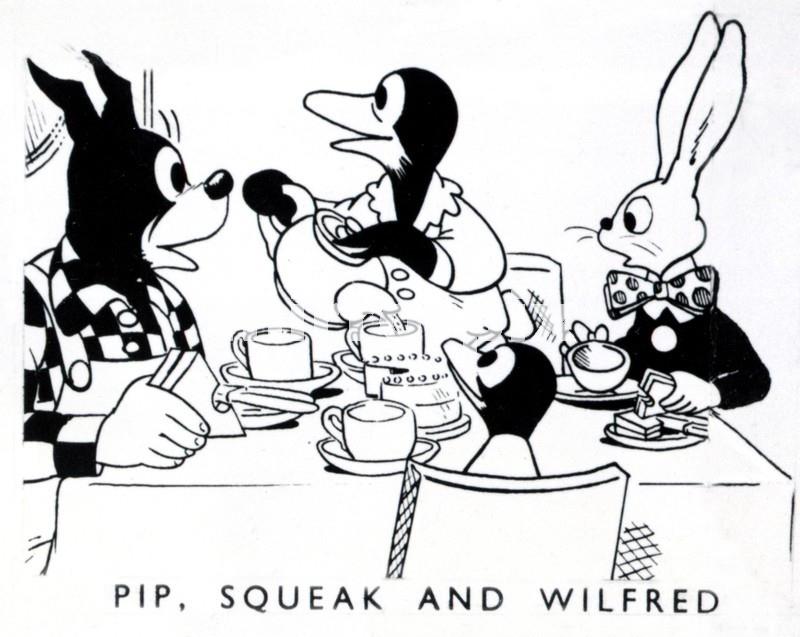 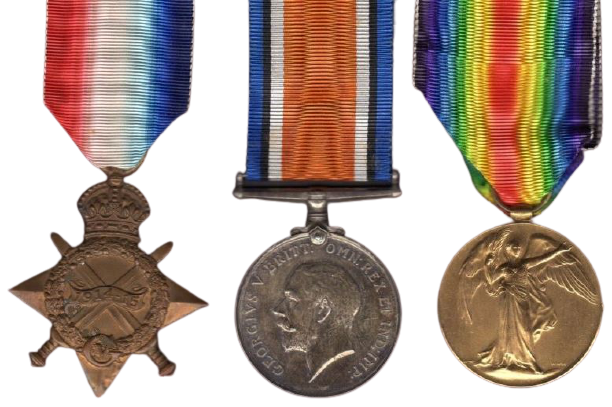 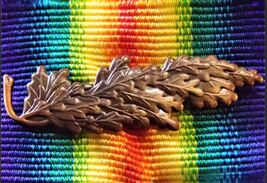 In 1920 individuals who were mentioned in dispatches could attach a bronze oak leave to the ribbon of the Victory Medal.

The “mention in despatches” was the most junior form of recognition that was announced in the London Gazette with Commanders-in-Chief  listing those men who had been nominated as worthy of a mention.
Originally there was no award as such, the literal mention of the individual in the despatch being deemed sufficient. However, it was decided during the Great War that an oak leaf emblem could be worn with the ribbon of the Victory Medal, denoting the mention. The mentioned man also received a certificate carrying his service details and a reference to the despatch in which he was mentioned. No complete index or register of those who were mentioned exists, although the National Archives has a partial list. All are listed in the London Gazette. The mention did not entitle the man to use the letters MID after his name for official purposes, although this form is seen from time to time.
(Ref-The Long Long Trail)
Distinguished Service Medal (DSM) 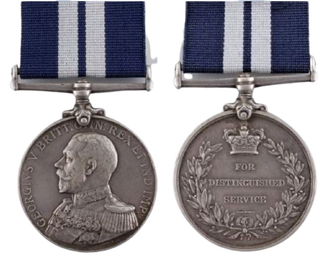 This medal was established in 1914 as the third level decoration for gallantry in action for ratings of the Royal Navy, it was awarded to members of the Royal Navy and Royal Marines, and formerly also to personnel of other Commonwealth countries, up to and including the rank of Chief Petty Officer for bravery and resourcefulness on active service.
​​
Distinguished Service Cross (DSC) 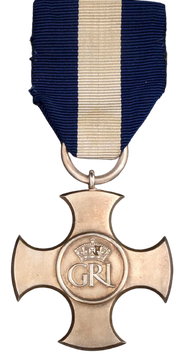 This medal was originally created in 1901 as the Conspicuous Service Cross but in 1914 was renamed the Distinguished Service Cross.

This is a third level decoration for gallantry in action for officers, commissioned and warrant, below the rank of Lieutenant Commander.

​A bar is awarded for subsequent acts of gallantry. The recipient is entitled to use D.S.C. after their name.
Silver War Badge. 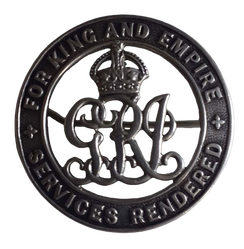 This badge was issued to those who had served in the military and who had been discharged due to a wound or illness. This badge first came into effect on 12th September 1916 and was issued along with a certificate of entitlement which was numbered.  It was sometimes incorrectly referred to as the Silver Wound Badge and was awarded to all personnel who had served at home or abroad since the declaration of the Great War on 4th August 1914

The badges were numbered on the reverse which matched the certificate and box.
Between September 1918 and December 1919 the badges had a "B" prefix before the number - between December 1919 and January 1920 they had the prefix "O".  After January 1920 and up to March 1922 the numbering resorted back to just figures with no letter prefixes.

The badge was to be worn on the right breast on civilian dress and was forbidden to be worn on any military uniform.  One of the main reasons for the issue of this badge was to stop men of military age, who were not in uniform being harassed or accused of cowardice and shown the 'White Feather'. 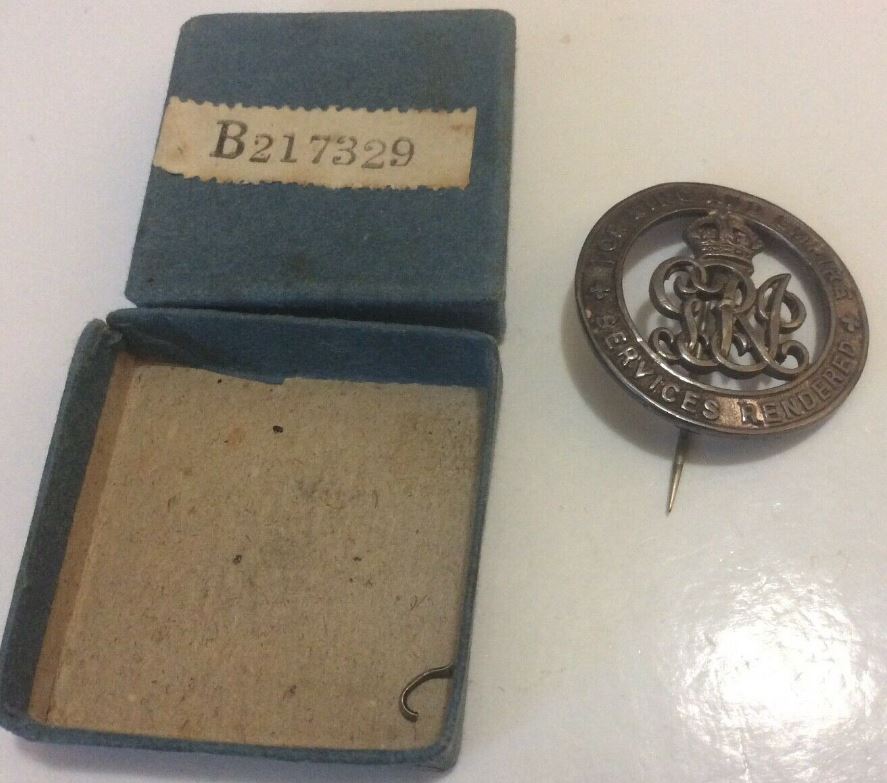 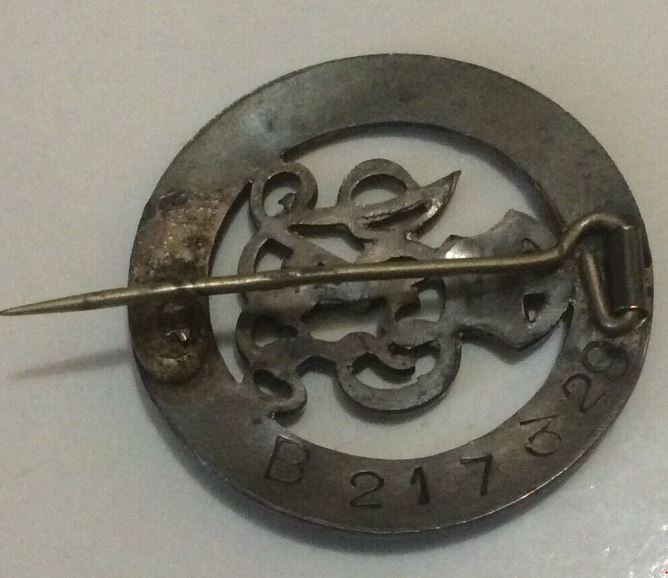 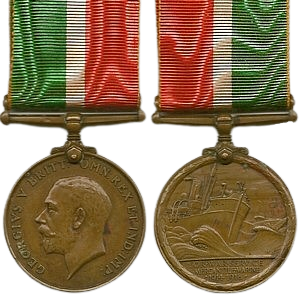 This bronze medal was established in 1919 and awarded by the Board of Trade of the United Kingdom to mariners of the British Mercantile Marine (now known as the Merchant Navy) for one or more voyages through a war/danger zone during the course of the Great War if they had served at sea for no less than six months.

The ribbon, coloured green, white and red represented a ship's port and starboard running lights with the masthead steaming light in the centre.
Memorial Plaque or Death Penny 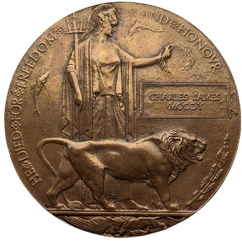 ​The Memorial Plaque was issued after the First World War to the next-of-kin of all British Empire service personnel who were killed as a result of the war. The Plaque has the name of the person lost but no rank showing everyone lost as equal. Over 1,355,000 plaques were issued.

The design was the result competition and was won by the sculptor and medalist Edward Carter Preston.

The winning design includes an image of Britannia holding a trident and standing with a lion. The designer's initials, E.CR.P., appear above the lions front paw. In her outstretched hand Britannia holds an olive wreath above the square bearing the deceased's name. To the right of the lion, is an oak spray with acorns. Two dolphins swim around Britannia, representing Britain's sea power, and at the bottom is a lion is tearing apart the German eagle. Around the edge reads "He died for freedom and honour", or for the 1500 plaques issued to commemorate women, "She died for freedom and honour". 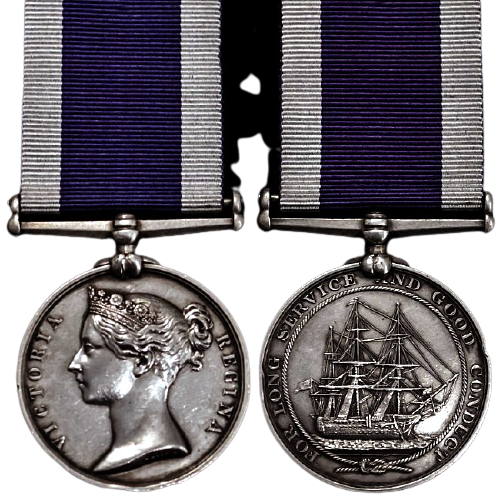 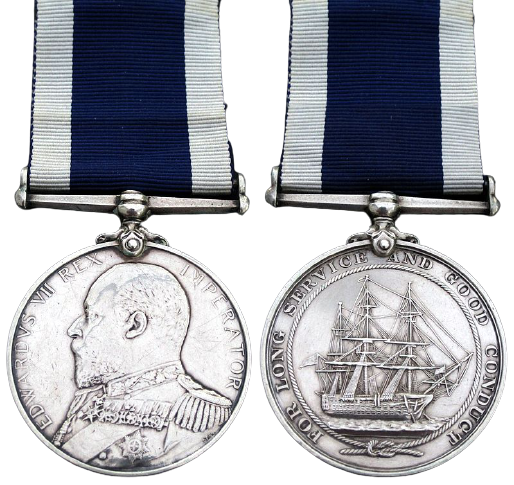 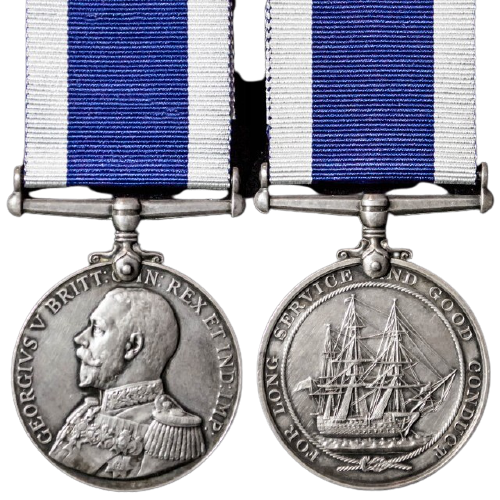 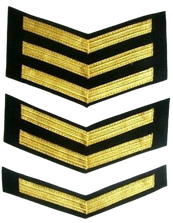 Good conduct stripes were introduced to the Royal Navy in 1849 and were originally awarded for 5 years (one stripe) 10 years (two stripes) and 15 years (3 stripes) good conduct. This was changed in 1860 and were awarded for 3, 8 and 13 years. The stripes would be worn on the left arm with the rating badge above it.

​These were awarded to Able Seamen, Leading Seamen and Petty Officers. 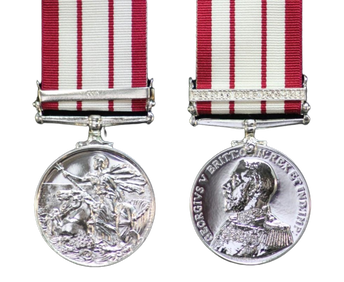 The medal was awarded to those officers and men who took part in the suppression of the arms traffic in the Arabian Sea or Persian Gulf between 19th October 1909 and 1st August 1914.
Royal Humane Society’s Bronze Medal

The Royal Humane Society is a charity, founded in 1774, that grants awards for acts of bravery in the saving of human life and also for the restoration of life by resuscitation.  Awards may be granted to those who have put their own lives at risk to save or attempt to save someone else.  These acts of bravery were awarded in the forms of bronze, silver or gold medals and testimonials on vellum or parchment.


You are able to research events relating to life saving events either via the Society or by London Metropolitan Archives (LMA).

Life Saving Awards Research Society (LSARS) – ‘www.lsars.org.uk’ – The Society has an online list of the RHS Bronze Medals (1837 to 2000) which identifies recipients by case number. Some details of the event for which they received their awards are given for the period 1892 to 1918.
Sea Gallantry Medal (SGM) 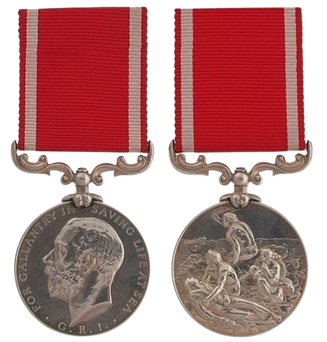 The Sea Gallantry Medal (or SGM, officially ‘The Board of Trade Medal for Saving Life at Sea‘), was an award for civil gallantry at sea in Great Britain and the Commonwealth issued through the Merchant Shipping Act 1854 and first struck in 1855. This medal was authorized not by Royal Warrant but by Parliamentary legislation.
​
Recipients were entitled to the post-nominal “SGM” until 29 November 2019.

The DSM was first created in 1919 and is presented to sailors and Marines to recognize distinguished and exceptionally meritorious service to the United States while serving in a duty or position of great responsibility.
At the start of World War One the Navy had the Medal of Honor as the only decoration with which to recognize heroism. At a level below, the Navy Distinguished Service Medal and the Navy Cross were created by Public Law 253 on 4 February 1919. The Navy Distinguished Service Medal remained senior to the Navy Cross until August 1942, when the precedence of the two decorations was reversed.

Exceptional performance of duty must be clearly above that normally expected, and contributes to the success of a major command or project. The decoration is normally only bestowed to senior Navy flag officers and Marine Corps general officers, or extremely senior enlisted positions. In rare instances, it has also been awarded to Navy captains and Marine Corps colonels.
United States of America Victory Medal 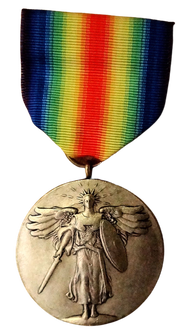 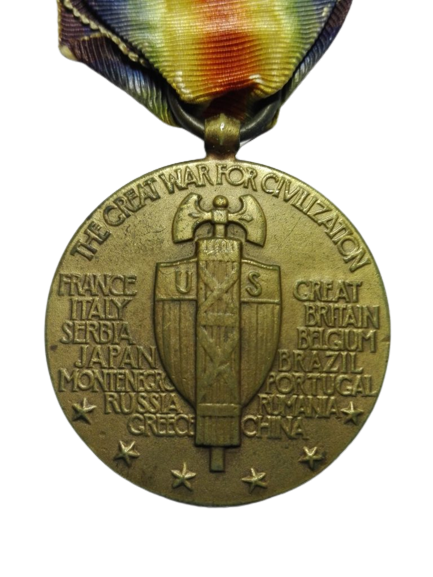 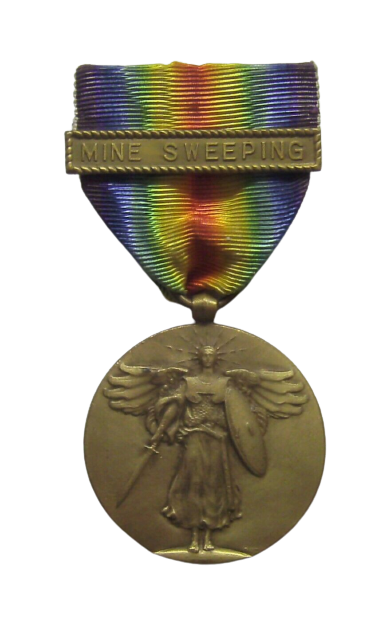