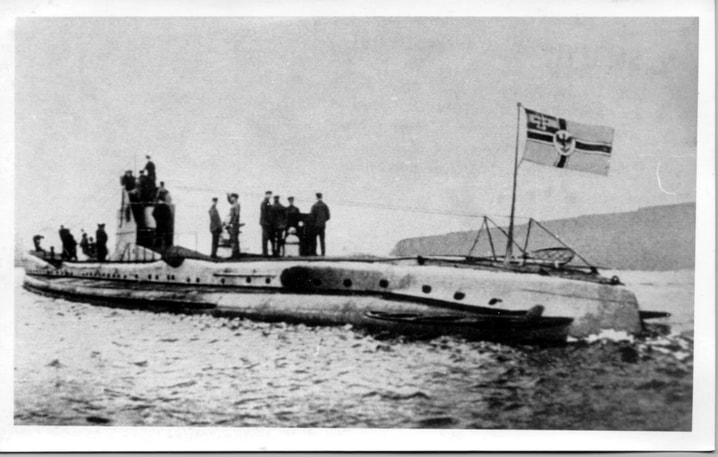 U 102 was due to return to Germany by the end of September 1918 after a patrol off southern Ireland but failed to do so. It was long assumed that U 102 had been lost in the Northern Barrage minefield. The commander was Kptlt. Curt Beitzen who, when in charge of U75, laid the mines in June 1916 that sank HMS Hampshire.

In 2006 a survey by the Marine Coastguard Agency on the tug MV Anglian Monarch located two targets that resembled  possible submarines. Michael Lowrey and Kevin Heath plotted the positions on the historic mine-map and both wrecks were within Area 'B' of the barrage. It was also clear that being on the northern side of the barrage, laid on 7th September 1918, this one was a homeward bound vessel.
​
The images were then compared to plans of various U boat types and were able to identify one clearly as U 102 meaning the other, by dimensions and location could only be U 92.

Plan of U99 class overlayed on MBES of wreck and a clear match for U-102. 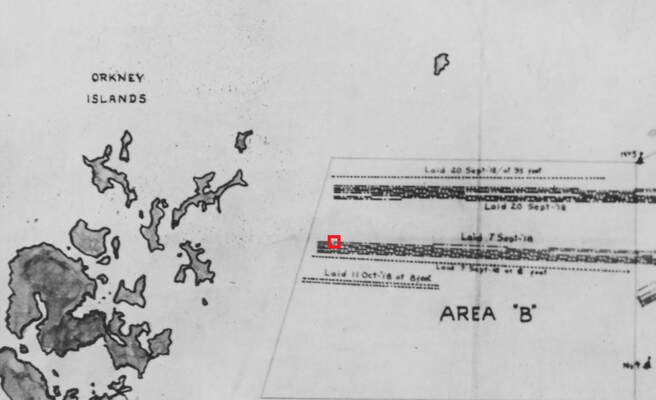 Chart showing Area B mines and location of U 102
The Wreck Today.

The wreck was first visited in 2006 by a group of technical divers led by Leigh Grubb diving from the MV Jean Elaine skippered by Andy Cuthbertson..

They were able to measure the deck guns and the aft gun was found to be the rare 88/45 instead of the standard 88/30. This confirmed the U boat as U 102. There was heavy damage to the bow and a large hole aft of the conning tower most likely from the mine.

The next group to dive the wreck included the divers Rick Ayrton and Matt Outram. Rick took these amazing but poignant photographs of the site.
​ 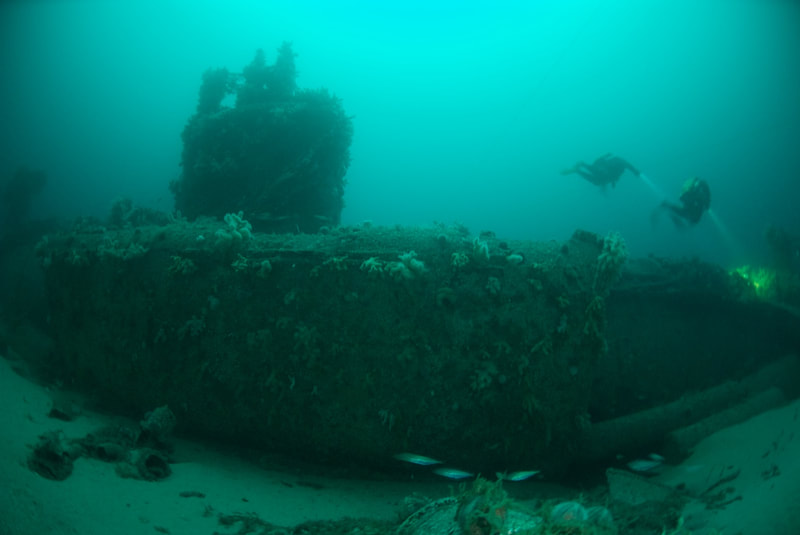 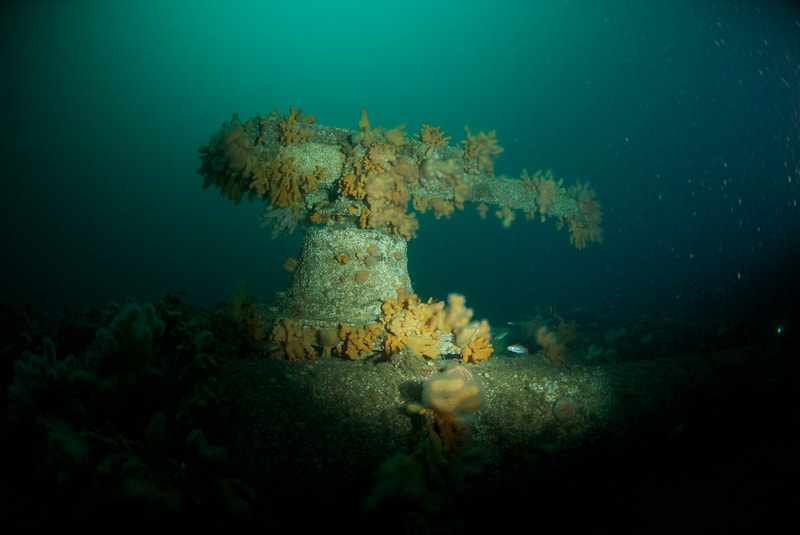 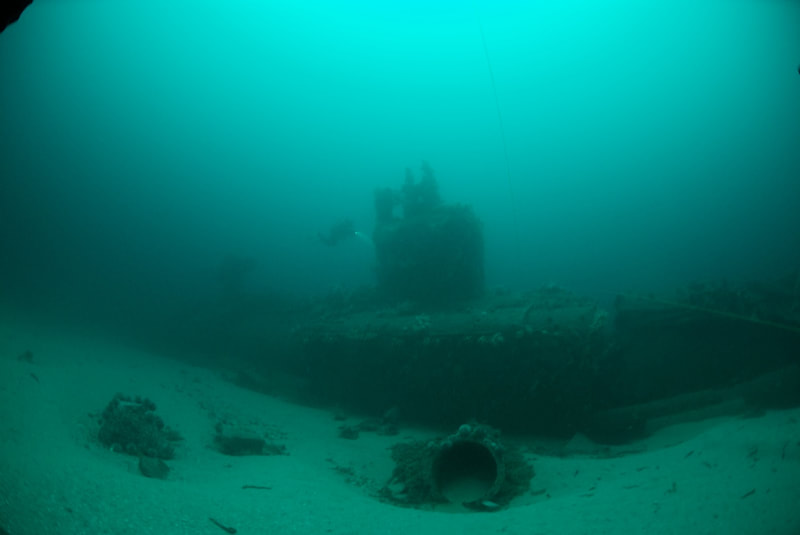 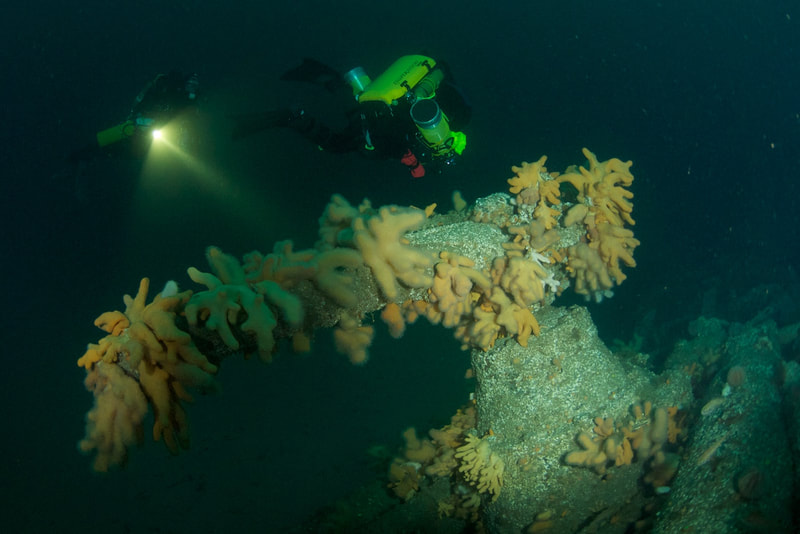 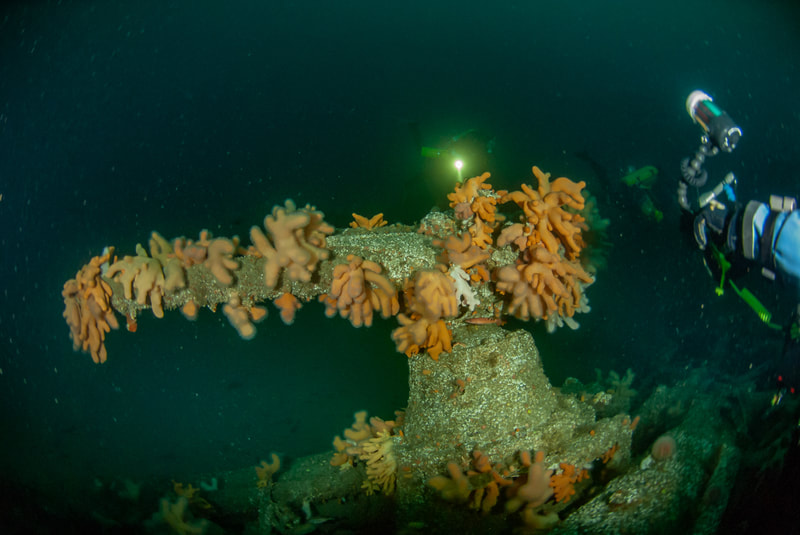 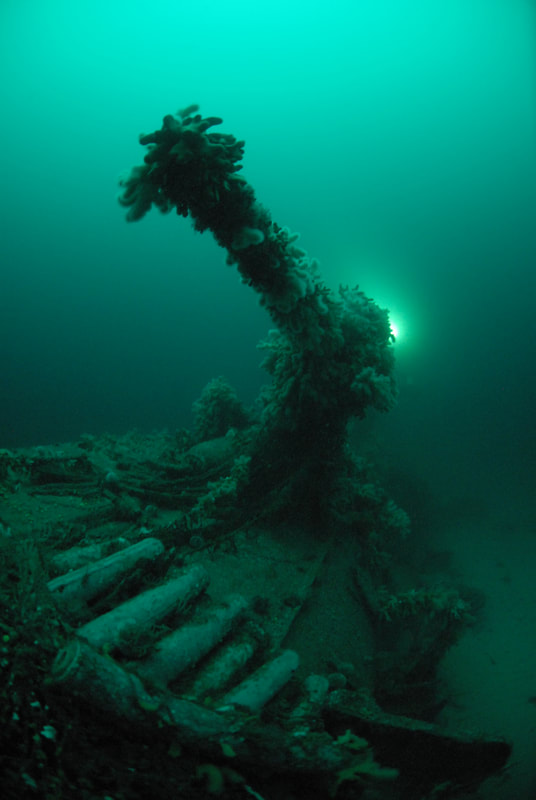 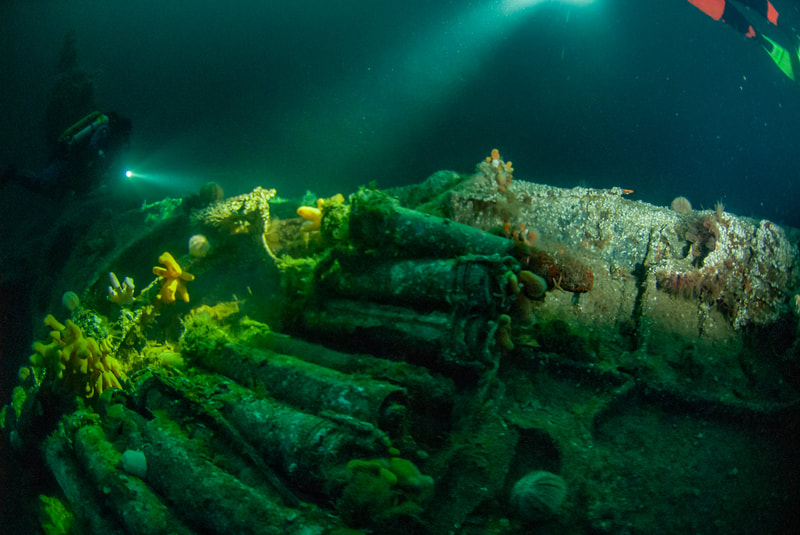 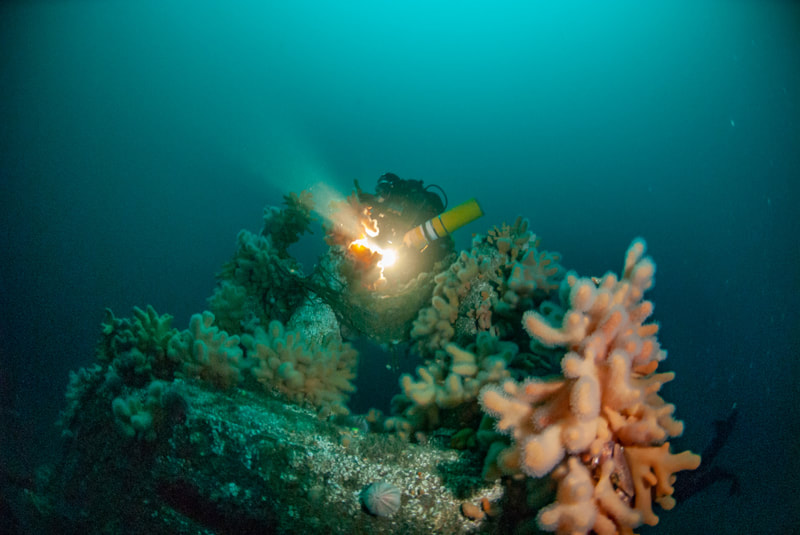 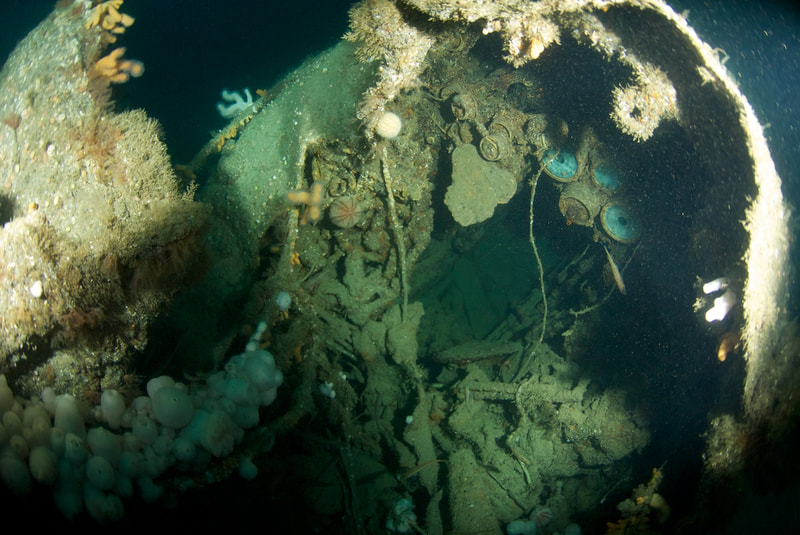 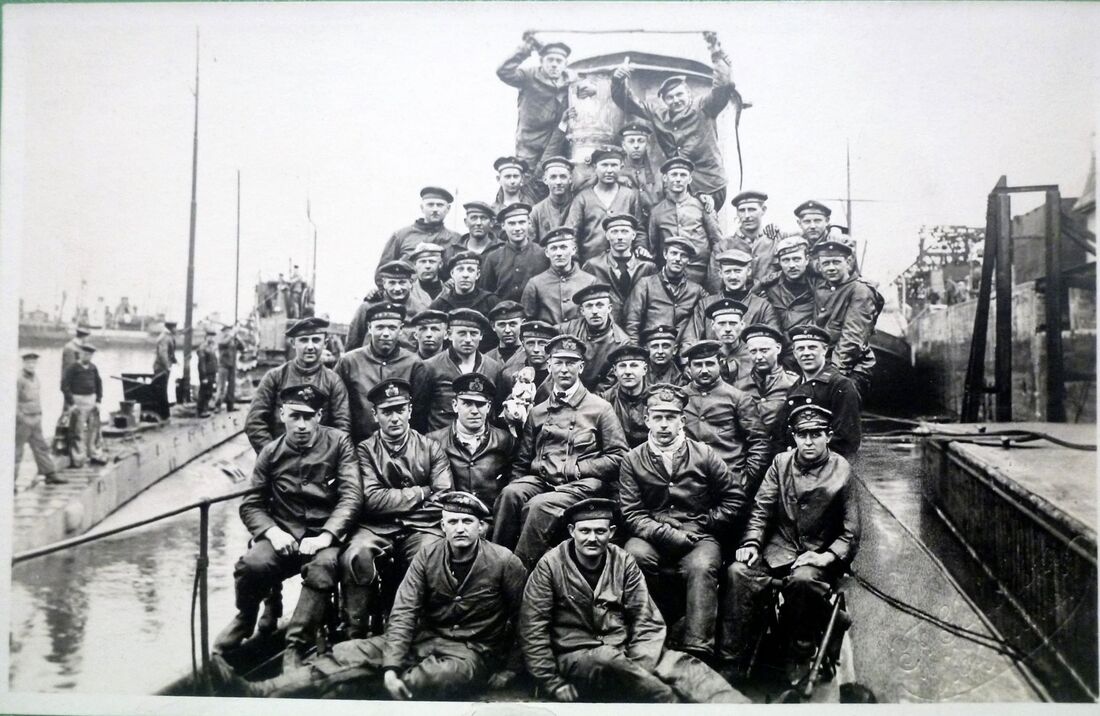 
The German crew will not be researched but will be remembered.
​


On May 23 1916 U Boat U 102’s commander Curt Beitzen, took his then submarine U 75 on a deadly mission around the waters of Orkney and secretly laid a carpet of mines around the western coastline near Marwick Head. U 75 had 38 mines on board and was constructed at the “Vulcan Werft”, Hamburg. The boat was commissioned on March 26 1916. Beitzen, born in 1885, entered the Imperial Navy in 1904 and served at first on SMS “Wiesbaden”, then transferred to the submarine service. U 75 was his first post as commander. On June 5 1916 the cruiser “HMS Hampshire”, carrying Secretary of War Lord Kitchener, left Scapa Flow for Russia. Unfortunately, he sent the two protection ships “Unity” and “Victor” back because of an upcoming heavy storm. The “Hampshire” took the western passage around Orkney, not the traditional eastern because the British Navy didn’t expect German submarines to have laid mines on the western coastline. A fatal error. “HMS Hampshire” was now alone on its way to Russia. Kitchener was on a secret mission. He was to advise the Russian Army on better cooperation with the Western Allies. He had papers concerning a total new reorganisation of the Russian Army with him, which never reached the Ally.

Not far from the coast of Western Mainland, “HMS Hampshire” ran into the mines presumed to be laid by U 75. The ship was lost at sea together with most of her crew: More than 650 men lost, only 12 survivors caused by the fatal order to send back the two protection ships. This was a major blow to the allies.

Beitzen was transferred to U 102 on November 26, 1917. The boat made 7 patrols. The last one began on September 2, 1918 at the German military port of Heligoland. His last transmitted message came from the area of the Scilly’s on September 20, informing the U-Flotilla about the passage homeward. On its way home to Germany the boat was lost with all 42 hands somewhere on the Northern Barrage – more than 70,000 mines, produced and carried by the USA and laid by the Royal Navy from Orkney and Shetland to the Norwegian coast. Another German submarine, the U 92 was lost in the same mine barrage within a week of the sinking of the U 102. Following publicity of the U-boat finds, a lucky and in a certain way incredible situation occurred. I had been researching for several years the fate of one of my relatives who was a U-Boat-Man in the Great War. With the help of several contacts on the web I was able to reconstruct some points in the navy career of my great great uncle named Alfred Gerke.

To find out on which boat he was lost was not difficult. The losses were documented. But the personnel files were lost in a fire caused by bomb attacks in 1945. So the reconstruction of Alfred’s career was very difficult. A puzzle of thousand pieces. At first I was informed he sank with U 102 which was lost without a trace in September 1918 somewhere in the northern North Sea between Britain and Norway. Then I got a copy of an injuries register in which was written, that he had a small hurt at his hands while stationed in Constantinople in winter 1916 aboard Boat number “25”. But U 25 has never been in the Mediterranean…A specialist in the warfare of the German navy in Turkey disclosed the secret: German submarines got an Austrian number while fighting in the Mediterranean. In reality it was the small mine layer UC 15, crewed by only 13 men. From a friend I got the war diary, the log. The prefabricated boat had been transported to the then Austrian harbour of Pola, where she was assembled. The boat had extreme difficulties while on course to Turkey. The machine crew did all to solve the problems and finally made it. One of the men was Mr. Gerke who was mentioned personally by the commander von Dewitz. This was one of the very rare cases that a man was named. This occurred only when he did superhuman work during several days south of Creta.

But it still wasn’t clear what he did before and after the time of UC 15. By chance I bought an old crew photo at Ebay. Once I had it in my hands I saw somebody who looked like Alfred. When I showed the photo to my father without telling him my presumption, he said immediately, there’s my uncle Alfred. The crew could be identified as the crew of UB 50. In autumn 2006 I spent a day researching in the U-Boat Archive in Cuxhaven, well known by all persons who want to clear up the fates of sunken ships and U-Boat Men. I had looked at thousands of photos, but without success. Only in the last file I discovered a photo of parts of the crew of the famous U 9, the Weddigen boat. In the background was Alfred as a young sailor, his face still youthful. Now another secret was solved: My family always spoke of Alfred and U 9, but until that day this was absolutely not clear. U 9 was famous because its 26 men crew made the first big submarine success in history when they sank 3 British cruisers on 22 September 1914 within one hour, but Mr. Gerke was not on board at this time. The photo mentioned above was taken in May 1915 after sinking several fishing trawlers on the Dogger Bank. The fishing boat crews were freed and put into life-boats.

Now it became really scary: One month later, in November 2006, I went to a near-by store because I wanted to taste a “real” whisky, not a blend. I chose “Scapa”, produced in Kirkwall on the Orkney Islands. Instinct or coincidence? On 19 November I visited the “Invaliden” graveyard in Berlin, famous for the graves of prominent soldiers. One of them belongs to the most successful submarine commander of all times, Lothar von Arnauld de la Perière. It was memorial day and I laid down a rose.

I knew that his boat and U 102 left Heligoland on the same day in September 1918. Alfred and Lothar must have known each other. Three days later I returned home from work and logged on to my e-mail. Fully electrified, I looked at an incoming mail: “U 102 found!” I couldn’t believe my eyes. That couldn’t be true I thought. The sender was Mr. Lowrey from the USA, a specialist of submarine warfare in the Great War, who informed me in Berlin. He knew from an internet forum that I was a relative of one of the victims. The two U-boat wrecks lie two miles apart and were found by coincidence during routine sonar survey in 2006 with the UK Maritime and Coastguard Agency survey vessel “Anglian Sovereign”.

I contacted the MCA with more details like construction plans and original photographs. With my help the identity of the wreck was nearly doubtless confirmed as U 102 and the other as U 92. After nearly 90 years a mystery was solved. Incredible! Now a long friendship between the man who researched  the submarine, Kevin Heath, began and I was very glad to travel to the Orkneys in 2008 to follow in the path of my relative. Fortunately, I had not only been researching in this personal matter for several years, but also in the history of “German Diplomacy and U-boat warfare during WW I”. The base of my research are the files of the political archive of the Foreign Office, where I am working since 1980. The fate of my relative was the catalyst.

In the meantime one evening I discovered another crew photo, this time no doubt, it was the crew of U 102 one day before their farewell from Heligoland in September 1918. The offer was on Ebay USA and I had no chance to get it because the offer ended at noon on a working day. Fortunately I knew the seller because his store is in…Berlin. I went to him straight away, told him my whole story and bought the unique picture. In 2009 I found another photo on Ebay showing the crew of U 102 shortly after the boat was put into service. One more incredible coincidence in this case. Meanwhile I got another photo showing him as a member of U 9 with Commander Johannes Spiess, the successor of Otto Weddigen, probably taken in spring 1915. This was the last item of a very special, sometimes nearly unbelievable story. In 2009, both wrecks were declared war grave to guarantee that the 42 men could rest in peace.