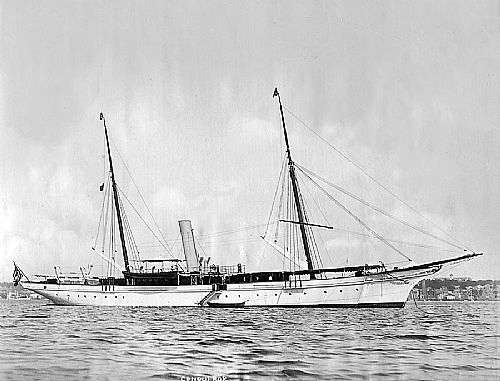 Taken from evidence given in the Court of Enquiry into loss of HMY Conqueror II and HMT Sarah Alice. (ADM137/3166)


On the evening of the 29th August 1916 the auxiliary patrol vessels,  HMY Conqueror II and HMT Sarah Alice, were on patrol  between Fair Isle and Shetland. A steamship had been seen heading from the north east and did not appear to be flying the recognised ''flag of the day'' and the steamship was ordered to stop. The vessel turned out to be the British SS St Gothard, 2788 ton of Glasgow. At 5pm with all three vessels sitting stopped, HMY Conqueror II gave the order for the steamship  to proceed. Moments later a torpedo was seen passing the bow of SS St Gothard which struck HMT Sarah Alice which foundered immediately in a cloud of smoke.
HMY Conqueror II started to move near to where HMT Sarah Alice sank to rescue survivors but a couple of minutes later another torpedo struck midships and HMY Conqueror II sank almost immediately.

SS St Gothard launched the starboard boat to attempt to rescue those crew from HMY Conqueror II in the water and from rafts.  A periscope was seen and by its course it was clear to the crew of St Gothard it was lining up for an attack. The Captain of St Gothard ordered his crew to launch the port side lifeboat boat and abandon ship. Within five minutes a  torpedo struck the steamship in number 3 hold and St Gothard was also sunk.

The U boat then surfaced and approached one of the two rafts from  HMY Conqueror II and took onboard Lieut Davis R.N.R, who was seriously injured.

The U boat then picked up William Charles Coles, Fireman from HMY Conqueror II who was found clinging to two planks of wood. Coles was told to stand by the conning tower where he was given some spirits to warm him up then questioned by the U boat commander. He was asked the name of his vessel but due to language problems he was asked to write down the name of the yacht and trawler but was too exhausted to do so. He also told the U boat commander he did not know the name of the steamship.

The U boat then approached the Mate's lifeboat (starboard) off SS St Gothard and instructed them to take the wounded Lieut Davis and William Coles. The U Boat commander then told the lifeboat there were men still adrift that need rescuing and that he had fired flares to summon help from a nearby trawler. There were several accounts in the Court of Enquiry from survivors of flares being fired by the U boat. Some crew also reported seeing red answering flares in the direction of Sumburgh Head.

The Captain of the St Gothard's lifeboat (port) was approached and questioned and asked what had happened to the confidential papers; the Captain answered that they had gone down with the ship. The U boat commander instructed the lifeboats to head east where they would be picked up by a trawler that had been signalled.  The U boat then left the area in a south easterly direction.


The port lifeboat under command of the Captain of St Gothard ignored the instructions from the U Boat commander and set sail north west for Shetland's west coast and landed at Wells at 7 am.

The Mate's lifeboat (starboard) stayed in the area and picked up some more of HMY Conqueror II's crew.


The Destroyer HMS Sylvia left Lerwick at 8 pm to search an area 12 miles WNW of Fair Isle to search for survivors of the U boat attack.

At 12.30 am cries were heard and HMS Sylvia stopped and turned on searchlight. They had found the Starboard lifeboat from St Gothard and the crew's were taken onboard, among them Lieut Davis who showed no sign of life. He was taken to the galley in front of the fire and CPR was tried for 3 hours but to no avail. The remainder of the crew's were taken below and given rum and cocoa.

At 1.00 am a faint cry was heard and a man, clinging to a box, was found and recovered.

At 4.00 am further cries were heard, one of the rafts found with seven survivors who were picked up. HMS Sylvia was then ordered back to Lerwick having rescued 28 people.

17 crew from HMY Conqueror II died as a result of the sinking.
​The U Boat U 52. (Kptlt. Hans Walther).
Taken from  information in U 52s KTB.


The KTB from U 52 shows that Kptlt. Hans Walther witnessed the steamer being stopped. The U boat moved in a position to attack the HMY Conqueror II and fired a torpedo 7.06 pm (Berlin time) range 600m. The commander had assumed a 'fehlschuss' (failed shot) but after 72 seconds (1350m) there was a detonation and HMT Sarah Alice sank.

at 7.08 pm (Berlin time) the HMY Conqueror II started to move when 2nd torpedo was fired and yacht was hit and then sank.

The U 52, remaining submerged, then approached the steamship and observes it is flying a British flag and the crew are observed abandoning ship with the port lifeboat. At 7.25 pm (Berlin time) a single torpedo fired and hits the steamship which is reported to have sunk in 3 minutes.

The U 52 then surfaces and in KTB comments that a fishing boat can be seen in the direction of Sumburgh Head (HMT Horace Stroud)  and white rockets are fired to summon help and these are answered with red rockets from the fishing vessel.

The KTB mentions picking up a person from the sea (William Charles Coles) but does not mention the wounded Lieut Davis. The KTB also states that the SS St Gothard lifeboats were approached and seaman passed over and instructions given regarding the trawler seen to the east. A further white rocket was fired. ​ 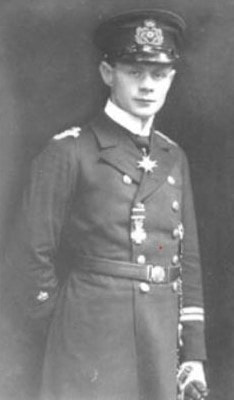 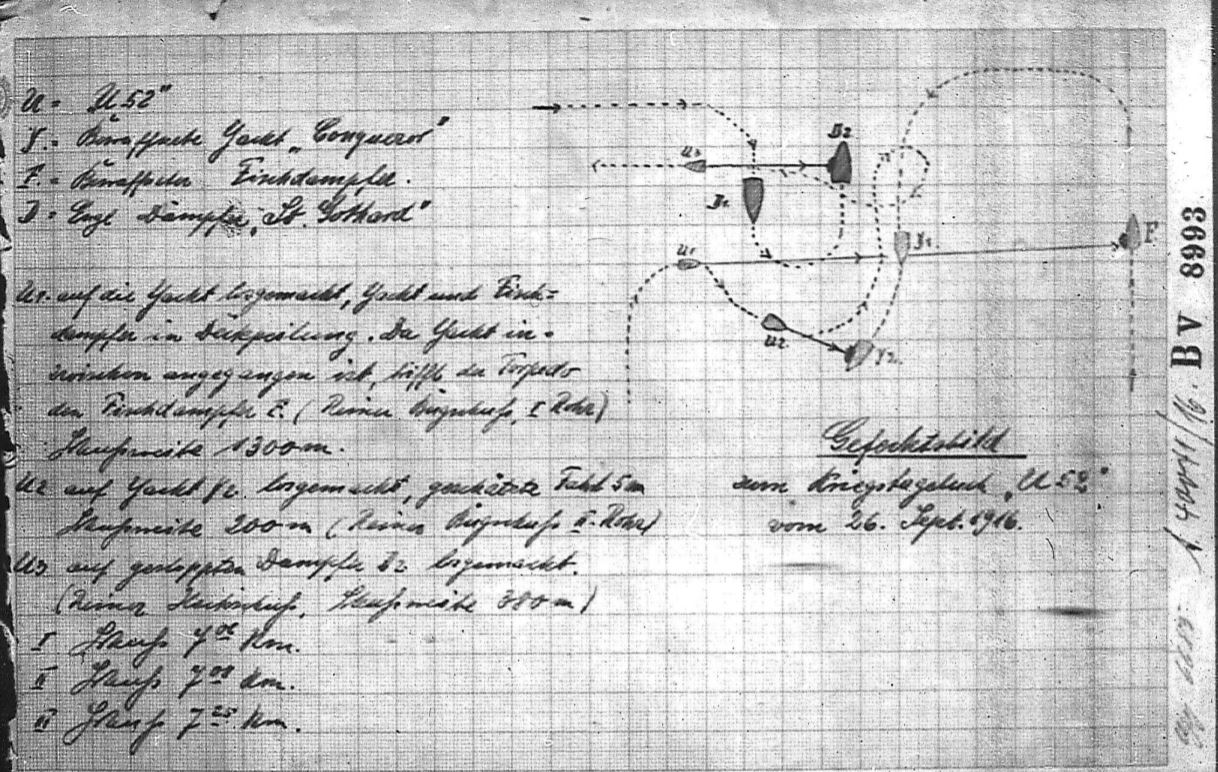 Above: Pages from U 52 KTB showing the action on the 29th September 1916.​​​
​HMT Horace Stroud.​
Taken from evidence given in the Court of Enquiry into loss of HMY Conqueror II and HMT Sarah Alice. (ADM137/3166)

The HM Trawler Horace Stroud No 280, commanded by Mr Middlemiss, had earlier been detached from patrol by HMT Sarah Alice to escort the Norwegian S.S. Victoria to Lerwick. At 5.10 pm, when off Sumburgh Head while returning to Patrol an explosion was observed about 14 miles to the westward, followed by a second and fifteen minutes later by the third.

A cargo steamship was seen to sink and HMD Horace Stroud steamed towards the position. When about three miles away commander Middlemiss reported seeing three U boats, one on either bow and one on the port beam. ( there was only one U boat so the other vessels were the two lifeboats). One of the U boats was reported to have fired three white flares.  Middlemiss also reported that he fired red verys lights and twice fired the 3pdr gun when he first observed the U boats. Middlemiss thinking he was going to be surrounded by the U boats so changed course to St Ninian Bay, Shetland, and reported the incident to HMY Ninonato. 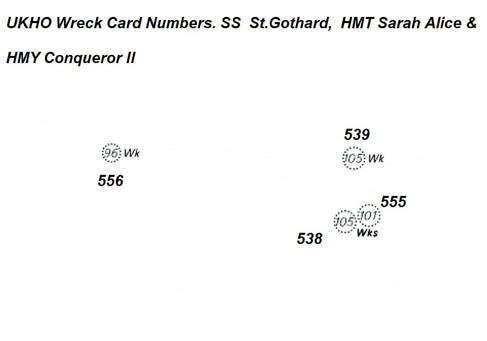 The UKHO have a number of charted wrecks in the area.  The wreck 556 is recorded as being HMY Conqueror II, 538 is recorded as HMT Sarah Alice, 539 as SS St Gothard and 555 as unknown. All of these are surveyed wrecks having been found in 1994.

This charted wreck 556 is 5 miles west of the other charted wrecks and research shows the vessels were in much closer proximity to each other when sunk.
​
The dimensions of 539 match closely that of SS St Gothard.  Using information from U 52s KTB attack plot it is more likely that 538 is ​HMY Conqueror II and 555 being further east could be  HMT Sarah Alice.